Some of you are aware that a few weeks ago I was asked to preach in my church (no, I’m not a pastor), and some had expressed a desire to hear it, since I was talking about marriage.  It took me a bit to get the 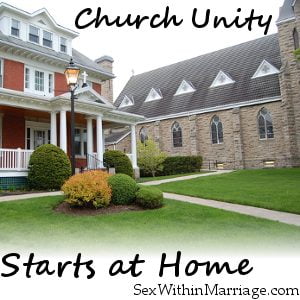 Some of you are aware that a few weeks ago I was asked to preach in my church (no, I’m not a pastor), and some had expressed a desire to hear it, since I was talking about marriage.  It took me a bit to get the audio, but here is it, for those who are interested in hearing me speak.

For those that wish, here is the written copy.  It’s not verbatim, and the audio is expanded in the examples, but if you want more information, that section is largely taken from my post on ineffective behavior patterns.

I think most of us have heard a sermon on church unity before.  It usually resolves around 1 Corinthians 1:10:

I appeal to you, brothers, in the name of our Lord Jesus Christ, that all of you agree with one another so that there may be no divisions among you and that you may be perfectly united in mind and thought.

It was he who gave some to be apostles, some to be prophets, some to be evangelists, and some to be pastors and teachers, to prepare God’s people for works of service, so that the body of Christ may be built up until we all reach unity in the faith and in the knowledge of the Son of God and become mature, attaining to the whole measure of the fullness of Christ.

Bear with each other and forgive whatever grievances you may have against one another. Forgive as the Lord forgave you. And over all these virtues put on love, which binds them all together in perfect unity.

But, I have yet to see anyone preach on unity using Ecclesiastes 4:9-12:

Two are better than one, because they have a good reward for their labor. For if they fall, one will lift up his companion. But woe to him who is alone when he falls, For he has no one to help him up. Again, if two lie down together, they will keep warm; But how can one be warm alone? Though one may be overpowered by another, two can withstand him. And a threefold cord is not quickly broken.

Why?  Because this is typically used as a marriage verse.  We use it in weddings to describe the union of a man and wife, together as one.  And too often, I think we fail to realize that, as with many things, church unity begins at home.

I’ll be honest, I had a hard time picking a sermon topic for today.  I had about 3 or 4, or 6 that I went through, started writing in my head, but every time I started, something was stopping me.  A couple I know why.  One was the wrong time of the year.  Another well, it would be better off as a workshop than a sermon.  But the others two or three, I just couldn’t make any headway on them.  It wasn’t my idea, I wanted to write them. I actually told Ahnikha, on this past Tuesday night even, that I was going to preach on another topic altogether.  But, the more I tried to write it, the more I just couldn’t focus on the task at hand.  I felt like I was supposed to preach something else.  I’m getting better at recognizing those prompts.

That night, while taking a break, my mind started working in the background.  Do you ever have that happen?  You’re focusing on something else, but these thoughts keep popping into your head.  And that’s where this sermon came from, or at least the topic.  It came to me that there is a link between church unity and household unity.  I think there are a lot of lessons learned in marriage can be applied to the larger context of church unity, and that behaviors seen at home are seen in the church.

For the last 3 and a half years, I’ve been doing ministry in the field of marriage, and I’ve come in contact with too many marriages to count. More and more I’m noticing that marriage has become a battlefield instead of a united household, and more and more I’m seeing that spouses treat each other like adversaries, instead of partners working together.

And I think often spouses don’t even realize their doing it to each other.  They’re so used to certain behavior patterns, learned from their parents, or learned from media, that they just fall into them when they get married.  To them it seems normal, but beneath the surface, with nearly every verbal exchange is an attack.  They show each other contempt on a daily, even hourly, basis.

So, married people, by show of hands, how many believe they show contempt for their spouse?

Well, let’s see.  I’ve gathered a few communication patterns that I’ve seen “in the wild” as it were.  While these happen a lot more frequently between spouses, they also occur between friends, workmates, housemates, church-mates, and just about any other type of relationship.  So, if you’re not married, you can play along too. Let’s see if you recognize any of them.

You did this because ….

I may have left the shoes on the floor, but you always do …

How dumb do you need to be to…

What you need to do is…

Attack and then run away.

All of these show contempt in some form of another.  They express your belief that you are superior than your spouse, or whomever you are talking to, and that their thoughts are beneath yours, they are less important and thus not worth acknowledging or dealing with.  If you engage in these behaviors, you show contempt for your spouse.  And I know it happens, I know these things are said, because I’ve heard these behaviors in our church between spouses, and not just one or two here or there.  Just about every weekend I see these wars waging, between adversaries, who are married to each other.  And before Christina and I learned to communicate effectively, we did every single one of these.  We lived like enemies, more often than allies.  That’s how I know them.  A far cry from our “two is better than one” verse.

Proverbs tell us that death and life are in the power of the tongue (Proverbs 18:21) that if we open our mouths in haste, we will come to ruin (Proverbs 13:3) and that rash words are like sword thrusts (Proverbs 12:18).

And so our marriages become warzones, with our children living in disputed territory.  The parents fight against each other, so the children must pick sides.  Because, after all, if both spouses are showing contempt for each other, then children think there must be one intelligent adult, and one, well, not so intelligent adult.  After all, they can’t both be right.  And both parents being wrong is a scary thought for a child…

So they learn that some humans have more value than others.  They learn that it’s okay to dismiss the thoughts of those you hold in contempt.  They learn that contempt is a valid viewpoint, without even knowing that that’s what they are being taught, because it’s taught by modeling the behavior, not through presentations, projects or textbooks.

They grow up, get married, get elected to a church board, or as the leader of a ministry, and these communication patterns that are so engrained in them just happen by reflex.  They don’t think about them, they don’t know anything is wrong.  It just happens, it’s just who they are.  It’s just the way they are.  And suddenly, our church boards, our leaders meetings, our constituency meetings are full of adult, Christian members who hold each other in contempt, who mock each other’s ideas, not openly, but behind the scenes, asking questions that undermine them, or just dismiss them out of hand.  They find others who share their viewpoints, and create alliances, strongholds against their fellow brothers, the enemies that they hold in contempt, because their views are different, wrong, and thus they are inferior humans.  Oh, they won’t say that, after all, we all believe we are created equal, but their actions show a different belief.  A cognitive dissonance between what they hold as theology, and what their behavior speaks.  Our boards fracture, we spend more time making political moves and less time worrying about real issues.  Our church loses confidence in its leadership and grumbling begins in the membership.

Sadly, I’ve seen this behavior in our own church.  Our board used to be fractured, years ago, before Francis came, before many of the faces I see here today.  And I talk to members in other churches, and they dread board meetings, others in those churches have told me they would turn down a leadership position, not because they aren’t fit to lead, or because they don’t want to serve, but because they don’t want to deal with the politics on the board.  This is what our churches have become.  Places where people would rather waste the talents God gave them, than work with their brothers and sisters.

Why does this happen?  How does this occur?  Because they’re stuck in a pattern of behavior, because they’ve been taught contempt at a young age, and it’s hard to unlearn that.  Because it’s easier to continue as you are than it is to change.

They could agree to hold each other accountable, to do their best not to get angry when the other points out “you’re kitchen-sinking” or “that’s a presumptive attribution” and work to install effective communication behaviors in their marriage.  They could learn to regard each other as equals, not just in some theological or philosophical sense, but in practical reality, learning to care about what each other thinks and feels.  They could work towards matching each other’s wants and needs instead of trying to find the path of least resistance to get what they want.

Their children would see this love modeled.  When they looked for a spouse, they would be looking for more than just someone who made them feel good now, but rather a partner that they could fight alongside for the rest of their lives.  They would grow up, get married and bring those behaviors they had seen in their marriage.  Starting strong, reaching levels of intimacy, physical, emotional, spiritual that their parents could only hope of.  And together they’d be an unstoppable force, fighting for God, modeling what love is.

They would join church boards, become elders and deacons, attend constituency meetings and be the voice of wisdom, of unity and bring people together.  And together, our church would be a beacon to the world, proclaiming God’s name, modeling the love that started in a home between two parents who used to hold each other in contempt, but realized there was a better way.

<
Can I write erotica for my husband and I?

When is sex outside of marriage permitted?
>