How To React To A Sexual Awakening

How To React To A Sexual Awakening

My last post, How Long Does a Sexual Awakening Take?, dealt with the fact that an awakening is sometimes a process, and one must be patient during that process.  This one will tackle the other side of the marriage: Typically, the high-drive spouse, the partner

My last post, How Long Does a Sexual Awakening Take?, dealt with the fact that an awakening is sometimes a process, and one must be patient during that process.  This one will tackle the other side of the marriage: Typically, the high-drive spouse, the partner of the “awakened” spouse.

So, how do you react when your spouse has had/is having an awakening?  Now, the only experience I have is my own to draw on, though I have read bits and pieces of others.  An awakening is fairly rare (once per couple max) event, and very few people are willing to discuss it openly, because, well, it has to do with their sex life.  But I have seen some similarities in comments, posts, forums, and the like, with my experience, so I don’t think mine is that radically different than the majority.  That said, I could be wrong, so keep that in mind.

When my wife first said to me “I promise I won’t say ‘No’ again” I’m afraid my immediate thought was a mental laugh and “yeah, right”.  I don’t suggest this stage, but it’s one I went through, and one many others have gone through as well.  The fact is, that most of us with “awakened” spouses have been in the non-awakened pattern for so long, that it not only is our reality, but we’ve usually lost hope of it ever changing.  We were married at 20 years old (both of us), and by the time we were 23, the hope I was holding on to was that female sexual prime around age 35.  That was my light at the end of the tunnel.  The light I wasn’t really sure existed, and I couldn’t see yet, on the far side of 12 years of tunnel still to come.  So, it’s hard to change that mindset.  We protect ourselves so much from the hurt, rejection just feeling unloved, of promises for sex unfulfilled, hints dropped and never picked up, of misinterpreting a signal thinking tonight is the night for sex, only to be let down again.  We learn to not believe anything that might be misconstrued as an initiation in any form.

Now, that is a reason, not an excuse.  I still had my will intact, and I could have decided to believe her.  But, I’m afraid I didn’t.

This sort of goes hand in hand with disbelief.  You’ll find a startling number of couples go from being sexless to sex every night for a period at the start of an awakening.  Why?  For some it’s because the awakened spouse is just so overcome with their sexuality that they want sex all the time…but that’s pretty rare.  In more cases I’ve seen (myself included), the reacting spouse is testing this awakening.  They don’t believe it is really happening and/or they don’t trust that it will last.  So, they test, and they take advantage of it.  I’ve mentioned before that this behavior is like a starving kid who suddenly gets food every day.  Almost invariably, a behavior occurs in these circumstances: hording.  They don’t believe there will be food tomorrow, because it’s never happened before.  So they stockpile food.  In the same way, I stockpiled sex.

We had sex for 10 days straight.  One day break, then 12 days straight.  After that, we had sex basically 9 of every 10 days.  The idea was to assume sex.  It took a while for me to stop hording.

Typically after an awakening, a new balance is struck.  Whereas it used to be sex maybe once a month (because one spouse wants it every day and one wants it never, so that’s the compromise), now it levels out to 2 or 3 times a week perhaps (numbers just for example).  This may take a while: it took us a few months to reach this balance.

Now, there are some where the new balance is the same as the old balance.  Perhaps the low drive spouse always was willing to have sex, but never wanted, or never initiated, or certain practices were forbidden, or whatever.  In those cases, the balance tends to be more of what’s allowed, who initiates, more active or more passionate.  An awakening is not always (and rarely only) about frequency.

This is probably the hardest.  In many cases, the awakened spouse has refused or was gatekeeping sex for a long time.  Years or decades.  Often the other spouse feels cheated, feels hurt and betrayed, feels like they were tricked into marriage.  I remember thinking that I felt like Jacob: I had gotten Leah instead of Rachel, because as soon as we got married, it seemed like my wife was a completely different person than my fiance was.  But you cannot move on until you forgive them.  That means not bringing it up maliciously in an argument, not using it as a tactic to get your way or pressure your spouse, or guilt them into anything.

But, after forgiveness, there is still hurt, still pain that must be worked through.  There is a relationship that needs to be rebuilt, trust needs to be established.  Many awakened spouses awaken only to find that their spouse has now turned into a refuser, sometimes out of spite, but more often because they are still hurting so much and can’t communicate and/or deal with it, or because they are terrified of being hurt, of believing the new promise only to have it snatched away later.

Others awaken to find their spouse suddenly has an ED (erectile dysfunction) problem, or a DE (delayed ejaculation).  These typically stem from the same issues.  Typically it is short term (days, weeks, months, maybe years), but not permanent if the couple is willing to work through it.

Sadly, just because someone is forgiven, doesn’t mean there wasn’t damage done that must be mended.  I cannot murder a man, repent, be forgiven and expect the victim to get up and get on with his life.  Forgiveness is only the first step in healing, but it is the pivotal step.  Without it, nothing can start.  After it, the rest will come.

Finally, you will get to a point where it is all in the past.  You have a new marriage.  You are happier than ever before.  And not only is your sex life healthy, is it growing deeper.  This is what all the work was for, but you cannot get here without the work.  I believe this is the stage we are at now, or very close to it anyways.  We can discuss the prior years without causing pain to each other.  We aren’t holding it against each other.  We are just basking in our new marriage.

So, that’s my story basically.  I’m afraid I didn’t handle it as well as I should have, but there it is.  In the hopes that it will help someone understand their marriage and it’s awakening.

Have you been through an awakening?  What was your experience?  Did you hit these stages?  Let me know so I can help more people. 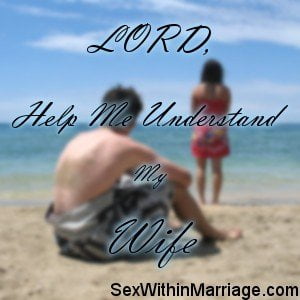 <
LORD, Help Me Understand My Wife 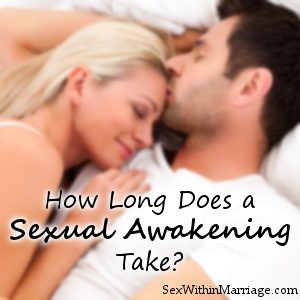 How Long Does A Sexual Awakening Take?
>

14 thoughts on “How To React To A Sexual Awakening”