LORD, Help Me Understand My Wife

LORD, Help Me Understand My Wife

I’ve been praying for years to understand my wife better, in particular, why she doesn’t want sex as often as I do.  Being the higher drive spouse who thinks about sex almost constantly, it is sometimes mind-boggling to me why she doesn’t think about sex…well…ever,

I’ve been praying for years to understand my wife better, in particular, why she doesn’t want sex as often as I do.  Being the higher drive spouse who thinks about sex almost constantly, it is sometimes mind-boggling to me why she doesn’t think about sex…well…ever, unless we’re having sex at that moment.  However, I do not think I’ve been praying with the right mindset/heart.  I was always praying more with the idea that if I understood her, I’d be able to change her.  Sort of a “know your enemy” idea, which, I admit, is a bad way to think about your spouses libido, as the enemy.  But recently that’s been changing.

In that few months, I’ve been praying the same prayer, but with a new intent: just to know my wife, so I can love her more (not physically, but emotionally).  Well, I’ve been told often during my life: “Be careful what you pray for, God might answer you.”  Well, He did.

I decided to do a water fast (ingest nothing but water), for health reasons.  Now, God designed out bodies to be extremely adaptable.  When you fast, several things happen:

So, for the first time, since I was 16 years old, I didn’t have a daily (or more) urge to have an orgasm.  Even when I was sick, my sex drive never really diminished before.  It was very … odd.  Now, my sex drive was still higher than my wife’s, but it did give me a closer understand of what she feels, or more precisely, doesn’t feel in regards to sex.

During the fast there were days when I would have chosen sleep over sex, days when I just wasn’t really in the mood, days when I wasn’t sure I’d have the energy for sex if I wanted it, and my will to initiate was severely diminished.

Now, these are things that over the years my wife has told me she feels often, but I had no way of comprehending what it was like.  It was too alien for me.  Usually, I’d choose sex over sleep 99 out of 100 times, unless I’ve been up for 36 hours straight, even then, I’d call it 50/50 if given the choice.  This has been a real eye-opener for me.

Sex is important, even if you don’t want it

So, I’m thankful for this opportunity, but, I have also become very aware, quickly, of the dangers of not enough sex in a marriage even if neither spouse is feeling deprived.  Because neither of us had a very high drive at the moment, we were having much less sex, but neither of us were feeling neglected because, well, we didn’t really want more sex.  However, the rest of our marriage has still suffered for it.  We were not as close, we argued more, we were snapping at each other more often, and, I think, we were both a little harder on our children.

I think, ultimately, it is the job of both spouses to constantly evaluate the intimacy of the marriage and gauge if more sex is needed.  Maybe the first to notice should be the one to one to initiate.  Granted, most of the time, this is still going to be the higher drive spouse, but not always.  I think this rule could fit for any aspect of marriage, if you’re noticing that you aren’t talking enough, suggest going for a walk together.  I think a lot of simple problems could be fixed just by the spouse noticing the issue speaking up and suggesting a change.  But often it’s human nature to be complacent and just sit and complain that you aren’t being fulfilled.

Have you had an experience that let you step in the shoes of your spouse?  What was it like? 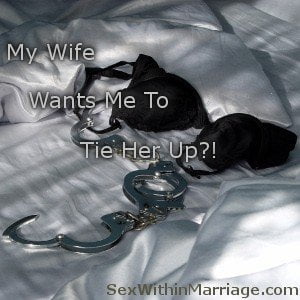 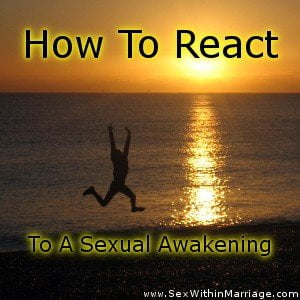 How To React To A Sexual Awakening
>

26 thoughts on “LORD, Help Me Understand My Wife”