Sometimes you need to be willing to risk what you have in order to get something better.  I’m not talking about leaving your spouse on the hopes of a better one, though that’s the message the world tries to peddle.  Rather, I’m talking about getting 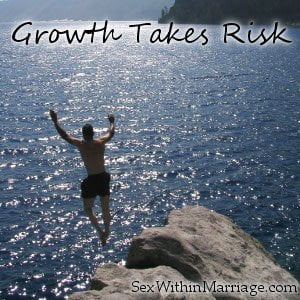 Sometimes you need to be willing to risk what you have in order to get something better.  I’m not talking about leaving your spouse on the hopes of a better one, though that’s the message the world tries to peddle.  Rather, I’m talking about getting a new marriage, with the same spouse.  Often, in discussions with spouses, I find they’re terrified of making a move, because they’re afraid of it getting worse.  But, you need to be able to risk what you have in order to grow.  This is a concept that comes up many times in the Bible, not only in terms of salvation, but in daily life.

I get emails almost every week from husbands and wives who say it is unbearable to stay in the situation they are in now.  They’ll tell me how intolerable their sexual frequency is.  They’ll share how their spouse’s behavior is causing them to be depressed to the point of leading to unhealthy behaviours of their own.  Yet, many will do nothing about it.  Why?  Because they’re not willing to risk the hell they are in for a potentially better marriage, with the same spouse.  A lack of sex is better than no sex and a fight.  A lack of creativity in the bedroom is better than a sexless marriage.  A lack of communication is better than a divorce.  Always the focus is on the negative potential outcome.

And yet, I’ve rarely seen a marriage improve without one spouse, if not both, getting to a point where they feel like they just stepped off a cliff.  A point where there’s no turning back.  It’s do or die now, because the words are out of your mouth, the email has been sent, the text has been received … there’s no undo any more.

And you know what?  Sometimes it does get worse first.  Sometimes it doesn’t get better.  But, to be honest, it doesn’t usually get much worse.  Rather, more often, the couple goes through some challenges and emerges stronger, with both spouses happier in the long run.  I’ve seen it again, with husbands who have admitted porn addictions, wives who have admitted affairs … even one couple where the husband went to jail.  Granted, his “jump” was sort of forced … but it still ended up being the best thing for their marriage.  I know, because they tell a lot of people their story, of how God used a prison sentence to heal their marriage.

The thing is, most have so little to lose, and so much to gain.  Most are miserable in their marriage.  They don’t want to continue, and yet they do, for fear of losing.  And what do they have to gain potentially?  A real marriage.  A godly marriage.  A marriage that can be a positive in people’s lives, instead of a drain on everyone it touches.

And I get it.  I remember being terrified.  I’ve sent the email that ends with “I understand if you don’t want to be married any more”.  I’ve been there; I went over that cliff.  And yes, it’s easier to say after you’ve gone over it, years later when you’re safe and sound, with a thriving marriage.  But, it doesn’t make it any less true.

So, ask yourself: isn’t it worth the risk?  Or would you rather be safe and sound in a marriage you know could be so much more?

If we say, ‘Let us enter the city,’ the famine is in the city, and we shall die there. And if we sit here, we die also. So now come, let us go over to the camp of the Syrians. If they spare our lives we shall live, and if they kill us we shall but die.” – 2 Kings 7:4

<
How to deal with an unrepentant spouse

Is it wrong to push my spouse to be more creative in bed?
>