We have a rule in our house.  You don’t say “yuck” about food.  We created this rule for our children, because with five of them, invariably one of them isn’t interested in what we made for supper.  You put the food down, and they push 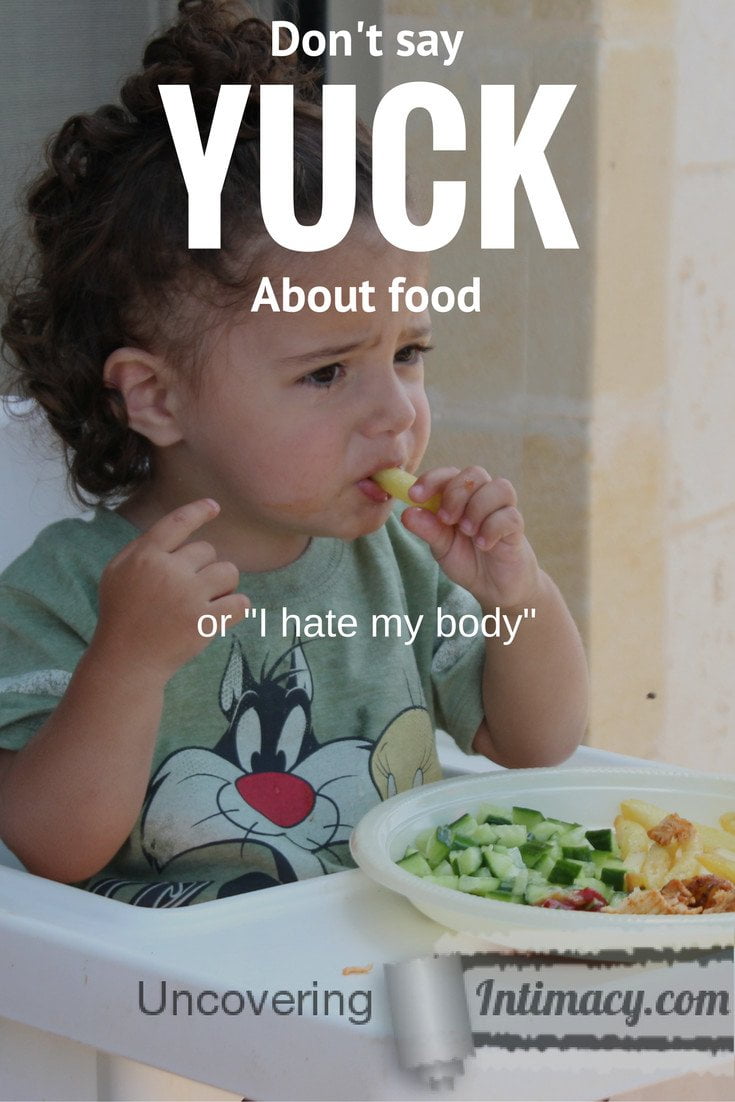 We have a rule in our house.  You don’t say “yuck” about food.  We created this rule for our children, because with five of them, invariably one of them isn’t interested in what we made for supper.  You put the food down, and they push it way and say “yuck”.  Why did we make this rule?  Because it’s insulting to the one who prepared it.  Either my wife, or I, spent time choosing a meal and cooking it, and “yuck” is the rudest thing you could say.   You’re saying that all the effort was wasted, that you don’t appreciate the time and thought that was put into it.  It’s rejection, not only of the food but of the cook as well.

Yet, I know many people do this every day with God.  Sorry women, but your gender, in particular, tends to be bad at this.  How many times have you stood in front of a mirror and said something to the effect of “yuck” or “gross” or “ugh” or thought “I hate my body”? Men, have you seen your wife do this?

“I hate my body” = You hate God’s creation

Body image issues play a huge role in physical intimacy, and far too many women look at themselves and say “yuck”.  The problem is that it not only negatively affects them, but their relationship with their husband.  It also affects their relationship with God.  Looking at your body and saying “gross” is basically telling God “I don’t appreciate the work you put into this.  I don’t like this body you gave me.  You made a mistake.”

God created us, looked down and said, “This is very good.”  He created bodies that are not only aesthetically pleasing but also an engineering marvel.  We still can’t even approach replicating His work with science, as smart as we think we are.

You don’t hate your body, you hate what’s been done to it

Now, because we’re fallen humans, we tend to make a mess of the things God has created.  I see my children do this with food as well.  Especially when they learn about salt.  They think everything needs salt and a lot of it.  Sometimes they put too much and they ruin the food.  Then, when they say “yuck” it’s a little understandable.  But when they push it away and say “I don’t like this supper”, then they’re misdirecting their frustration.  It’s not that the supper is bad.  It means they’ve mishandled it.

We do the same thing to our bodies.  We look in the mirror and say “yuck, I don’t like this body”.  The body isn’t the issue.  That’s a part of us.  That’s who we are, and it’s that which God knit together in the womb.  Instead, we should look in the mirror and say “Wow, I’ve mishandled this body.” and then ask God to help us be better stewards of it.

For some of us, we haven’t done anything wrong.  Sometimes it’s due to sickness, injury or even malice.  In those cases it’s still the same.  It’s not the body that’s the issue.  God’s creation was good.  It’s humans’ stewardship that’s sinful, whether of our own bodies, or of others.

The next time you look in the mirror and think “yuck”, remember “Don’t say yuck about food.”  Thank God for your miraculous body, and then promise to take as good a care of it as you can.

Do Christians have sex during their period?
>