I had intended to write this post last year some time, after our orgasm difficulties survey.  But, I guess I got sidetracked with a bunch of other topics, and it was forgotten until yesterday’s post.  It’s a bit ironic that the post on delayed ejaculation 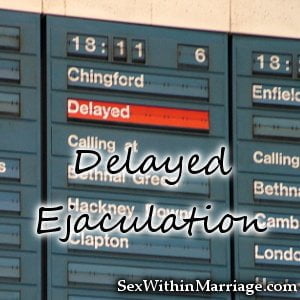 I had intended to write this post last year some time, after our orgasm difficulties survey.  But, I guess I got sidetracked with a bunch of other topics, and it was forgotten until yesterday’s post.  It’s a bit ironic that the post on delayed ejaculation got delayed…but now I’m catching up.

What is Delayed Ejaculation?

So, for those that don’t know, delayed ejaculation is an orgasm difficulty that affects men, and it’s defined as having difficulty ejaculating within 30 minutes of sexual activity.  In our survey, about 2% of husbands are afflicted by this most of the time, and more than half have experienced it at some point.

For those who suffer from premature ejaculation (which is ejaculation in under a minute of sexual activity), this might sound like a dream.  But, it’s not.  It’s extremely frustrating.  Especially when it’s obvious your wife is getting bored, sore, exhausted, or just generally wishes it would end.  Or, when you have a prolonged sexual encounter, and then you don’t have an orgasm at the end, because you can’t.

Now, I know some women might be thinking “30 minutes to orgasm…that’s normal”, and you’re right, for a woman that is about statistically average.  But, not for a man.  If the average time to orgasm for men is 8 minutes, that’s nearly four times longer than average.  Women are reported to have an average time to orgasm at 30 minutes, so the equivalent would be taking nearly 2 hours of continued sexual stimulation to orgasm.  I think most would be quite frustrated at that point.

Delayed Ejaculation can be caused a lot of things:

It can also be caused by a lot of other things:

And, some have issues that can’t easily be explained but are present from birth.

Now, some of these can be resolved, but even if the underlying issue is treated, sometimes the psychological effect, the fear of having delayed ejaculation, can then cause delayed ejaculation.  But, in a lot of cases, you can actually manage to be free of this struggle.  For myself, it was a combination of quitting porn, changing my diet, losing weight and drinking more water that helped me.  These days I don’t suffer from delayed ejaculation most of the time. In fact, for the first time in our marriage, we’ve actually managed to pull off some quickies, though that’s still rare.

What can you do as a wife?

If you’re the wife, and your husband is suffering from delayed ejaculation, my advice is to be patient and be loving (as always).  It’s okay to share your frustration, but be clear that you’re frustrated with and for him, not at him, and keep looking for solutions rather than focusing on the problem.  Know that the problem is not that you aren’t sexy enough or desirable enough.  That said, sometimes you can do something that’s just a bit sexier, in the moment, to help push him over the edge.  What that is will be different for each couple, but I’m sure you can figure it out.

I hope that helps those who are struggling with this.  If you have struggled with delayed ejaculation in the past and managed to get free of it, let us know what helped in the comments below! 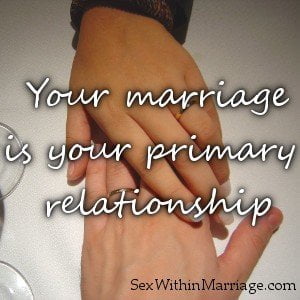 <
Your marriage is your primary relationship 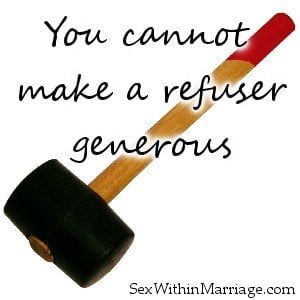 You cannot make a refuser generous
>