I caused a bit of a stir yesterday with my post Romance is the death of sexual attraction.  This is sort of a part two, but not the part two I think a lot of people were expecting.  In short, if you don’t want to

I caused a bit of a stir yesterday with my post Romance is the death of sexual attraction.  This is sort of a part two, but not the part two I think a lot of people were expecting.  In short, if you don’t want to read the post, the point I was trying to get across is that needing someone to bolster your sense of self, needing romantic gestures in order to feel complete, will kill your spouse’s sexual attraction for you.

It’s not the point many took from it, but that’s what I was writing about.  Today, I’m writing about the other side of the coin: that being confident is sexy.

Confidence is something I find I constantly have to work on.  Growing up as I did, I constantly second guess a lot of my actions.  I’m very confident in my thoughts, in who I am, even in my work, but social interactions are something else.  Interacting with people is always a struggle.  That’s really where confidence is shown, when you are interacting with others, and so, appearing confident is a struggle for me.

Even with my wife it is hard to appear confident while initiating sex in particular.  Probably part of this is owing to our history as I have some lingering fears of rejection, despite it not being a valid fear any more.  I’m getting better at it, but occasionally I slip into old mannerisms.  I think a lot of people have this trouble in their marriage.  Initiating sex is scary.  It’s putting yourself out there.  Emotionally naked and vulnerable, if not physically.  Unfortunately, often we’re our own worst enemy in these situations.  Our lack of confidence lessens our chance of our spouse wanting to have sex with us.

Because, while the Bible says we’re not to deprive our spouse, we don’t just want a willing partner, we want a desirous lover.  We want our spouse to want us.  We also don’t want them to come to us as a supplicant, begging for sex.  If you look at TV shows and movies, we often see this juxtaposition between married sexual initiation and unmarried.  Married men (in particular) tend to come to their wives begging for scraps regarding sex.  They’ll take anything, anywhere, do anything just to “get lucky”.  Frankly, it’s pathetic.  No wonder their wives are portrayed as being uninterested in sleeping with them.

Contrast that with those who are unmarried, or having affairs.  Typically there is this hunger, this desire, but without the neediness.  There’s usually an air of confidence involved as well.  This bearing of “I’m worth the risk”.  And if it doesn’t happen, that’s okay.  They’ll just move on to conquer something else.

People love to watch these interactions.  They want to vicariously be that confidence, or be approached with that confidence.  Not that we want to commit adultery, but we want to have that affair with our spouse.  We want to be pursued because we’re desired.  We want to be attacked with lust and pushed up against a wall.  I don’t think it matters if you’re a man or a woman, the idea of someone singling you out and saying “I want that one” is very arousing.

But most of us don’t do that.  We don’t pursue our spouse with that desire.  We ask timidly about sex.  We hint around about the possibility of some “fun”.  We wait until we’re both in bed so their’s the least resistance to sex.  I know, because I do it too!  Some days it’s so bad, we’ll be in bed, naked together and my wife will say “… so, are we doing something, or what?”  That’s a pretty strong kick to say “Hey, step up and be more assertive.”

Each gender has problems doing this.  Men have been taught for the last few generations to wait and let the woman lead.  Much to our detriment, because most of them want nothing more than to be led.  Women, on the other hand, have been taught for centuries that “good girls don’t like sex”, and while the mindset is slowly shifting, it’s still strongly embedded in the subconscious of most Christian upbringings.  The result is that no one is initiating confidently, and this adds to the already complicated set of reasons why couples don’t have much sex.

But, it’s not just when initiating sex that we should learn to be more confident.  It’s in daily life.  A person who feels complete (see yesterday’s post), a person who is powerful instead of powerless (see Danny Silk’s book) will not only tackle their marriage and sex with confidence, but will tackle life with assertiveness.

Now, there are some who are a bit too assertive, and they need to tone is down, but the root cause is still the same.  They feel powerless, they feel incomplete.  They use their false bravado as a mask to hide their insecurities.  When they become powerful, they’ll actually become more meek.  But, it will still have the same result.  They’ll find their spouse becomes more attracted to them.

We were not created to be bullies any more than we were created to be doormats.  Christians should be confident and assertive, without being overbearing and demanding on one side, or passive and cowardly.  It’s that balance, which is so difficult to strike, that is really attractive.  In fact, it’s so attractive, that people will try to balance them in their life.  There is a stereotype in media of women going after the “bad boy”.  Why?  Do women find bad boys most attractive?  I don’t think so.  Rather, most often, they are surrounded by, or married to, men who are passive and cowardly.  They want the assertiveness and confidence so much, they overshoot and are drawn to the opposite side of the spectrum.  Then, some men over-correct by becoming overbearing and demanding, and for a time, their wife is happy.  But, it’s only for a time.  Eventually, they will become unhappy again, and be drawn to those men who are passive, and cowardly, willing to do anything to get their attention.

Swap the genders around, and the same struggle exists.  How many men fall to porn because the women in it are unashamedly sexual.  Not only confident, but blatant.  Again, these women are too far on the other side of the spectrum, but when your wife is timid in bed and not open to any adventure, then a woman who is open to everything, even if she lacks morals, looks appealing.  But, what if they actually got that woman.  Eventually they would find that their willingness to have sex with anyone, to show off for any man would be unbearable, and they’d be drawn to women who are more demure and timid again.

The problem is that there aren’t many who are successfully finding that balance.  Christians in particular tend to pop up on the side of the spectrum that is more afraid, cowardly, passive and ashamed, and so most of us need to come more balance, which will feel a bit like becoming the “bad boy” or “bad girl”, and that’s hard, because we’ve been taught from a young age not to drift that way. More than that, we’re afraid of how our spouse will react, when in reality, most of our spouses would be extremely happy to have a husband or wife who is more assertive, expressive and self-assured.

Because confidence is sexy. 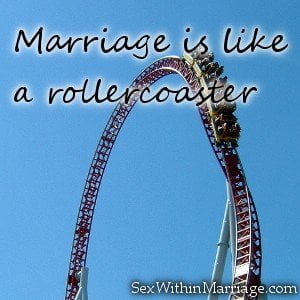 Romance is the death of sexual attraction
>

20 thoughts on “Confidence is sexy”