Being more skilled at rejection

Being more skilled at rejection

A couple of posts ago, I wrote about being more skilled at initiating sex, but today we’re going to tackle rejection.  I think sexual rejection might be one of the touchiest conflicts to handle in marriage.  It’s hard to do correctly and too easily to 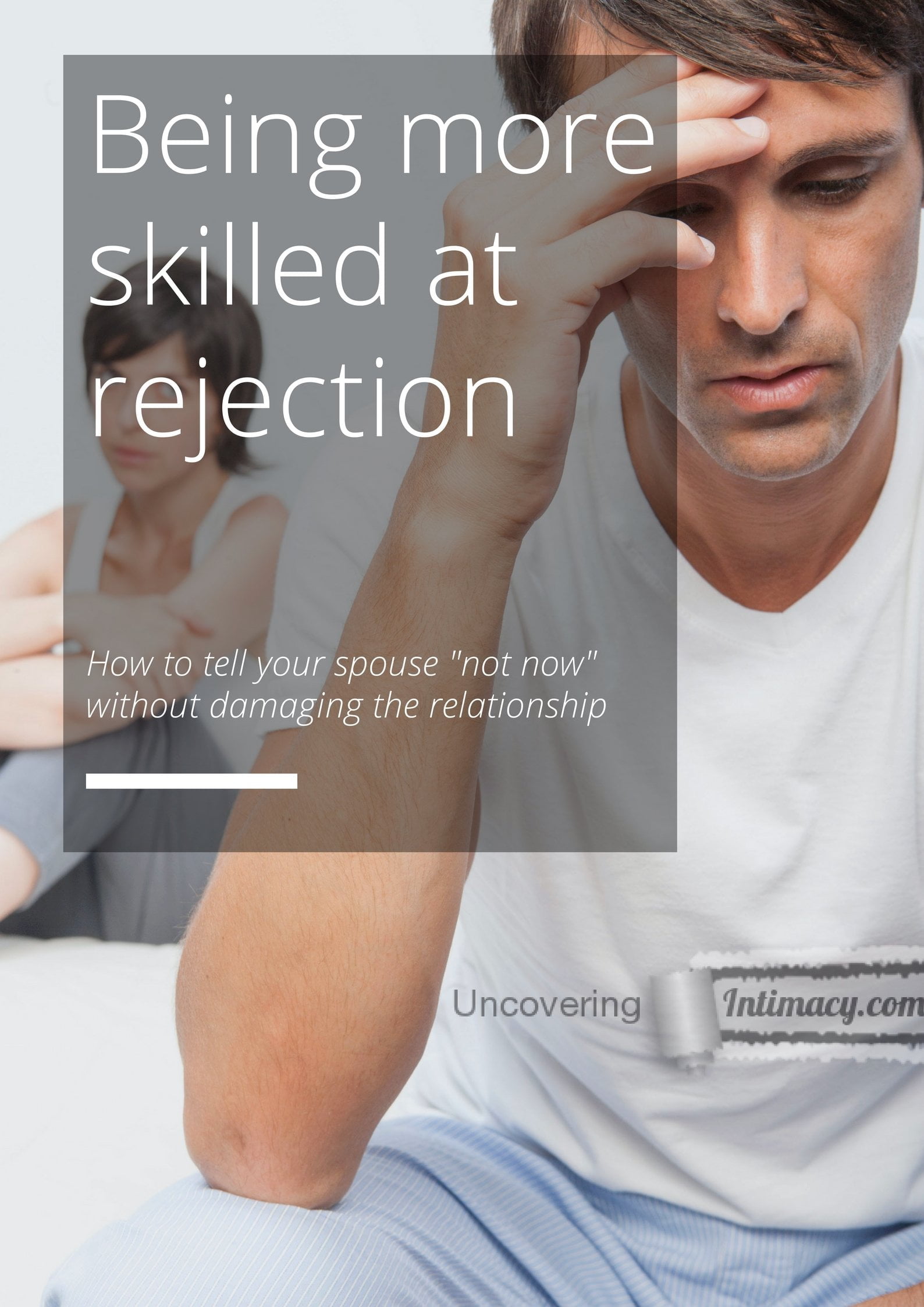 A couple of posts ago, I wrote about being more skilled at initiating sex, but today we’re going to tackle rejection.  I think sexual rejection might be one of the touchiest conflicts to handle in marriage.  It’s hard to do correctly and too easily to do really poorly.

You can utterly destroy a marriage based purely on sexual rejection. Here’s how.

My wife Christina will be adding her thoughts in purple.

1. How to demoralize your spouse when they ask for sex

All you need to do is pick one, or more, of these behaviours when responding to their initiation:

Respond with “no” without considering it

One of the things my wife admitted to me after we started repairing our marriage was that often she would just reject me out of habit.  She didn’t even consider the initiation anymore, it just was a reaction without thought. It’s true. From the initiating spouse’s perspective, though, we don’t know it’s just habit.  Often it seems to be a deliberate and hurtful response. But from the other perspective, they may not even realize how hurtful the response is.  Either way, though, any rejection without consideration is going to end up damaging the relationship.

You’re not up for a multi-hour sex marathon, so just shut down any hint of initiation.  It’s just too daunting and exhausting to think about.  Since sex doesn’t happen often if you “give it” you gotta make it epic to make it worthwhile.  Don’t bother negotiating or offering alternatives.  Just reject your spouse’s advances at the first sign of them.

You could lie and fake a stereotypical headache, or just don’t offer any reason why at all.  Another way is just to say “I’m not in the mood” as if that’s a valid reason. It’s like you just can’t possibly muster up the energy to give it a chance. It’s easier this way.

Make them feel wrong for being hurt by the rejection

When you reject your spouse and they show any negative emotion, like feeling hurt, disappointed, sad, angry or even rejected, you call them a sex addict.  Make it clear that it’s their fault they’re feeling that way and has nothing to do with you.  That you’re the reasonable one and that their emotions are because they’re broken.  You’re not responsible for them feeling disconnected. You’re not responsible for their reactions, why is it such a big deal that you don’t want to right now?

2. How to reject your spouse skillfully

That heading kind of sounds wrong, but I mean what I wrote.  Unfortunately, a lot of people think that rejecting your spouse skillfully means rejecting them in a way that they’ll never ask for sex again but without damaging the relationship.  But, that’s a fairy tale.  What you’re really doing is demoralizing your spouse so that they give up on the relationship and eventually don’t bother initiating again because it hurts too much to try and be intimate with you.  This extends into all areas of marriage until you’re living separate lives because intimacy on any level is impossible without serious repair.

Skillful rejection is not about getting your spouse not to initiate sex again.  It’s about postponing sex, with cause, until a more appropriate time in a way that does not damage the relationship, or at least minimizes the damage.  How do you do that?  Well, as with the previous post, we reverse the bad behaviours:

Give serious consideration to your spouse’s initiation

When your spouse initiates, don’t just give an automatic “no”.  Instead, evaluate what the impact on your relationship would be depending on whether you said yes or no.  See if there is any part of you that wants to reconnect and focus on that.  Use that to influence your attitude towards willingness.  Remember that many people (most women) have responsive sex drives rather than spontaneous sex drives.  Meaning, just because you aren’t in the mood now, doesn’t mean you can’t get there without too much effort. Think about what effect your willingness can do to impact your spouse’s day or night, or next day.

If you have a habit of saying “no” out of habit, when you realize what you’ve done, go back to your spouse and say “I’m sorry, I didn’t actually consider your request.  I’m willing if you still want to.”  In this way, you can start to break the habit of saying “no”.

Offer what you are up for sexually

If you aren’t up for a multi-hour sex marathon, then don’t just shoot down any initiation.  Offer up something that you are willing to participate in.  If your spouse says “Hey, want to go have some fun in the bedroom?”  Don’t just reject it because it might take a long time.  Instead, say “Sure, but can we try to make it a quickie?  I’m really feeling tired.”  Just don’t do this every time, because eventually, they will get the feeling that you are just trying to invest the minimum time required for your physical relationship.  At some point, you need time to explore and really connect.

Tell them why you aren’t up for sex

If it’s really not possible and you have to say “no”, then explain why.  You owe them that much, at the very least.  And don’t pick an excuse out of the air.  If you have a migraine, then okay, that makes sense.  But if you’re having migraines every day, then you should be working with a doctor to clear those up (I prefer naturopathic doctors myself).

If it’s because you’re exhausted and simply cannot muster the energy, then that’s okay.  But if you then continue to watch TV, or play on your phone, then you send the message that you were lying about being exhausted.

And there’s nothing wrong with saying “I’m really not in the mood, but we can try to get me there.”  It might not work, that happens, but at least you were willing.  Jay tells me all the time that my attitude is what makes things great or not. So if you’re not in the mood, and you suggest trying to get there, be willing to relax and enjoy each others company. Don’t get stuck thinking, “I’m not in the mood, and you can’t get me there!” Like it’s a challenge to see if you can not enjoy sex. Your not enemies, you’re husband and wife, you’re partners in life, so try to have some fun together.

Allow them to be hurt and validate their feelings 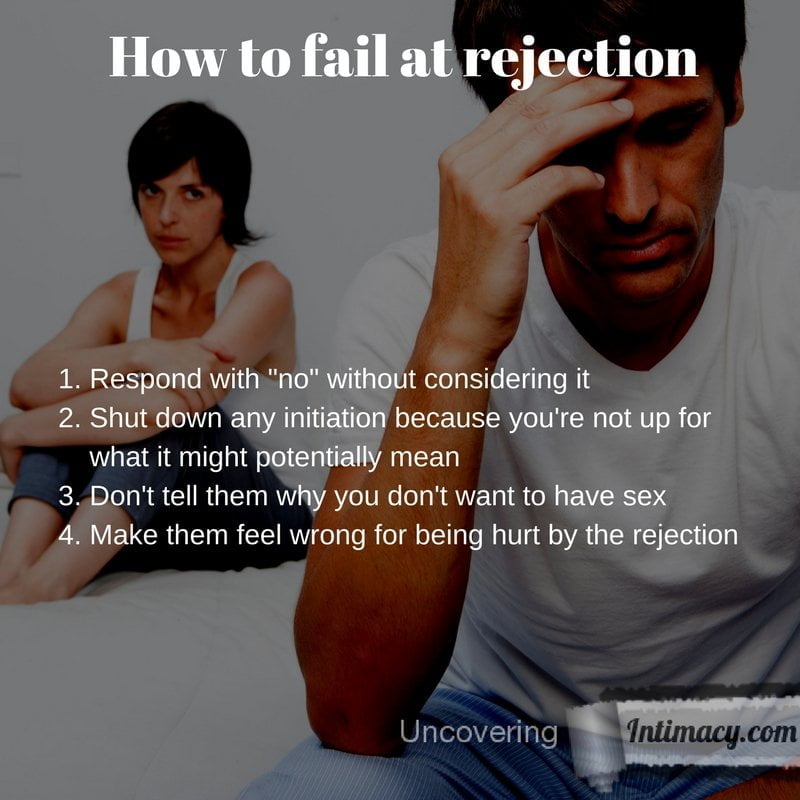 One of the things that separate healthy couples from unhealthy couples is their ability to be emotional coaches rather than dismissing their emotions.  In other words, you need to be able to accept and validate your spouse’s feelings, not shut them down or make them feel bad for having them.  God gave us emotions for a reason, and there’s nothing wrong with having, so-called “negative emotions”, like sadness, hurt, disappointment and such.  Even God feels those.

Unfortunately, a lot of higher-drive spouses get told, when they initiate, that they are sick.  That they are a sexual addict.  That they’re only interested in sex.  That their sex drive is sinful and ungodly.  These attacks are meant to destroy their sense of sexual self in the hopes of spiritually or emotionally castrating their spouse.  It’s a show of contempt.  It’s manipulative and, frankly, abusive.  In the end, these tactics not only destroy the spouse, but also the marriage.  I know, because I get emails from them saying they wish they could leave their spouse.  Most don’t because of their kids.  Some admit they wish their spouse would die as that would be the easiest outcome to deal with.  And that’s a terrible place to get to due to this constant abuse they face in their marriage.  And I know that if a few are admitting it, many more are thinking it.

So, how do you respond?  Well, the same way you should when your child is sad or angry.  When they feel frustrated or hurt by someone.  You don’t tell a 4-year-old “Go to your room until your happy!”  Or at least you shouldn’t.  You should be validating their emotions.  Saying things like “It’s okay to feel hurt, and it’s perfectly understandable.”  Don’t use the same tone you would to a child with your spouse, but the same principles apply.

Tell them that you understand they’re disappointed and that you are too.  Tell them you are looking forward to the next time you can reconnect (which should be as soon as possible).  In that way, they don’t feel alone, and they don’t feel like a freak for feeling the way they do.  They also don’t feel like the marriage is one-sided when it comes to sex, which is how the higher drive spouse often feels when they get rejected regularly.  That feeling of being the only interested spouse is dangerous because it spills into the rest of the marriage until they feel they are the only one interested in being married at all.  Again, I know, because I get emails saying just that.

If you can stick to these skillful behaviours, you can manage to reject your spouse (don’t fool yourself, it’s still a rejection), without causing undue damage.  At the worst, you should be able to repair it easily, so long as you don’t wait too long to have sex again.  If possible, initiate yourself at the next possible time, that will amplify the repair considerably.

So I didn’t have as much to say throughout the post as I thought I would. But this is a tough topic. Jay covered everything I would have said. If you find that you are one who does this to your spouse often, please take a close look at the words you speak to your spouse, and think about what kind of affect they might have on them.  When I realized how hurtful my attitude was, it was a game changer, I couldn’t believe how I came across. So please don’t think your refusing spouse is doing this maliciously. If they love the Lord and want to be Christ-like, they wouldn’t want to hurt you in this way intentionally.  Many honestly have no idea they are being so hurtful. Just continue to pray for them, and try and speak about this with them on how it is hurtful. Email me if you like (christina.e.dee@gmail.com), I’ll see what I can do to help.

<
How to have a conversation 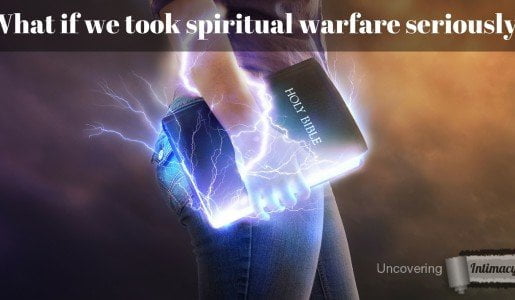 What if we took spiritual warfare seriously?
>

25 thoughts on “Being more skilled at rejection”