Is resentment ruining your marriage?

Is resentment ruining your marriage?

Resentment is a dangerous feeling. I see it in marriages nearly every day. A spouse has done something years ago, and it was never dealt with, or never adequately resolved. Perhaps there was no apology, or maybe no forgiveness given. Either way, resentment grows. There 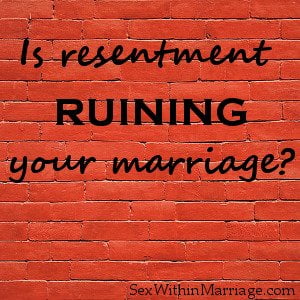 Resentment is a dangerous feeling. I see it in marriages nearly every day. A spouse has done something years ago, and it was never dealt with, or never adequately resolved. Perhaps there was no apology, or maybe no forgiveness given. Either way, resentment grows. There are a lot of marriages with resentment that just sits there in the background. In a lot of cases I hear “it’s fine, I’ll get over it”, in other situations I’ve heard “I just need time” and that’s the feeling a lot of people have. That time will fix resentment. However, I think the truth is very different. That resentment, given time, can fester and continually damage your relationship.

Now, I like to see what the Bible has on the topic of resentment, and really it doesn’t have a whole lot to say explicitly. We do have a couple verses though:

And when you stand praying, if you hold anything against anyone, forgive them, so that your Father in heaven may forgive you your sins. – Mark 11:25

Therefore, if you are offering your gift at the altar and there remember that your brother or sister has something against you, leave your gift there in front of the altar. First go and be reconciled to them; then come and offer your gift. – Matthew 5:23-24

This second verse popped into mind a month ago when a woman at my church was looking unsettled. I asked her if she was okay, and she said that her husband and her had just had an argument on the way to church and it hadn’t been resolved, so they were still angry with each other. This verse came to mind immediately. Here they were in church, supposedly offering praises to God, but they were consumed by this resentment. Obviously not the most worshipful experience.

I think this verse is often misunderstood. Sometimes we see it as a punishment from God if we don’t forgive others. If we continue to resent, then God will spank us until we stop. But, I don’t think that’s how it works.

Rather, I think resentment changes us. When we hold on to resentment, when we decide to stay angry, or hurt, or upset, or untrusting, it changes us. It makes us put up walls, it stops us from being vulnerable, it hinders our ability to be intimate. Eventually, we will find it hard to ask God for forgiveness for the things we have done, because asking for forgiveness requires vulnerability and intimacy. But if we’re stopping ourselves from being vulnerable and intimate, then we will fail to ask for forgiveness with a truly repentant heart. And if we aren’t willing to repent, then we are continuing to sin, continuing to break that relationship, and so how can God forgive us while we are actively sinning?

The same holds true in our marriages. If we hold on to resentment with our spouse, we are actively deciding not to have an intimate relationship with them. Yes, we might talk, we might even have sex, but on some level, we are intentionally holding back. We’re deciding to break the relationship.

The becomes a problem, because we train our brains on how to react to people. Every time we make a decision, our brain changes in small, minute ways. Over time, these can become big changes. So, if we hold on to resentment, our brain starts getting used to the idea of not trusting, of holding back, of deciding not to be truly intimate. Eventually, these pathways in our brain will grow stronger than those saying we should trust our spouse, that we should be vulnerable with them, that it’s safe and we can be intimate. When that happens, then you are in trouble. It means that your default starts to switch. Whereas before your inclination was to promote intimacy, now the “natural” thing to do will be to withhold intimacy, to not trust them, to build walls.

The longer this continues, the harder it becomes to fight against this, now, larger neuro-pathway. Mistrust, resentment, anger, bitterness, they become normal, they become the default, and they will undermine your marriage at every turn. Eventually, a relationship with your spouse will become unbearable, for either of you, because intimacy will be impossible to establish.

I believe this is why the Bible is so strong about forgiving quickly, about not delaying, about reestablishing relationships as soon as possible, because the sooner you catch it, the sooner you can stop those pathways from growing, the easier it will be to reestablish a relationship. The longer you wait, the harder it becomes. In a way, you become addicted to the resentment, and that addiction becomes a cycle. The more you resent, the more easily you will find it to be resentful.

So, if you have hurt feelings, start working through them. Time does not heal all wounds. Sometimes time lets them fester and become infected. So, decide today not to resent, but rather to work towards intimacy again.

Men and orgasms vs ejaculation
>

9 thoughts on “Is resentment ruining your marriage?”