When I received these emails, I was appalled, and my mind immediately jumped to this verse:

When the unclean spirit has gone out of a person, it passes through waterless places seeking rest, but finds none. Then it says, ‘I will return to my house from which I came.’ And when it comes, it finds the house empty, swept, and put in order. Then it goes and brings with it seven other spirits more evil than itself, and they enter and dwell there, and the last state of that person is worse than the first. So also will it be with this evil generation.”

Please, I implore you, do not be taken in by this counterfeit.  Satan will always try to twist Christianity in order to bring it closer to the rest of the world, and this is just another attempt in a long line of counterfeits that slowly water down Christianity, until it’s hard to recognize where the line is.

Do you not know that you are a temple of God and that the Spirit of God dwells in you? – 1 Corinthians 3:16

God has promised that He will send His Spirit to dwell in us, but there are some conditions:

Jesus answered and said to him, “If anyone loves Me, he will keep My word; and My Father will love him, and We will come to him and make Our abode with him. – John 14:23

Love God, keep His word (the Bible).  That’s it.  Like so many thing in Christianity, the answer is simple … living it out is hard.  So, how do you quit porn the proper way?  Invite God into your heart to replace it by loving him, and keeping to the teachings of the Bible.  This book is a manual for your life.  Yes, it also teaches you the path to salvation, but honestly, that’s a fairly minor part of the Bible (in terms of content, not significance).  The vast majority of the Bible is a guide to teach you how to live here on Earth.  So, read it, follow it, build your relationship with God, and He will help you in this struggle. 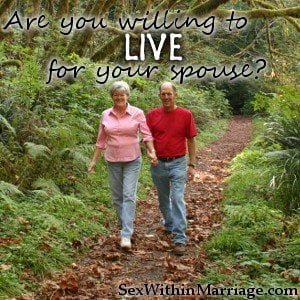 <
Are you willing to live for your spouse?

Is it okay to use a toy as foreplay?
>