How we grow as godly writers

How we grow as godly writers 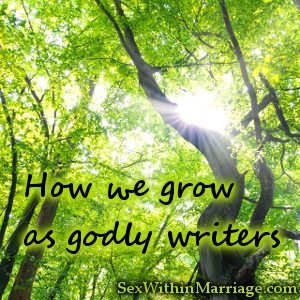 Last week I put a question out, in the form of a survey, in response to an email I received, a criticism in fact.  Is this blog informative, or erotic, or somewhere in the middle?  Have we strayed from our mission? Have we crossed the line on what is acceptable and godly…  While it would be easy just to shove the question aside, to rationalize my own writing (correctly or incorrectly), or claim “we’re doing God’s work, so we must be right”, I believe in the counsel of many, in wisdom of godly people, and while I don’t know of the individual relationships between our readers and God, I trusted that if there was rebuke to be had from God, He would convict me, through the voices of many, even if it was a single comment.  Because, I believe this is one way to grow as godly writers.

I posted the survey preparing for criticism.  I braced myself for rebuke.  I expected to have to adjust my thinking, and prepared to accept it with humility.

What we received instead was an overwhelming wave of support, the likes of which we never expected.  We received 186 responses to the survey, 82 of which contained comments.  We also received a few comments on the blog post itself,   A few comments were short, but the majority were paragraph size.  Their contents?

Stories of marriages that have been helped through God working through us.

Some just telling us how much they love our blog.

Some saying how our posts are conversations starters in their marriage (I love these!).

Some sharing what posts specifically helped in their marriage bed, or activities they tried and loved.

Some were other bloggers sharing how they’ve had the same questions about their own writing.

Many just wanted to say thanks for our ministry.

Others were harder to hear: Readers sharing about how our blog is sometimes difficult to read, because it highlights how damaged their own marriage is.  About sexless marriages that have lasted months, years, decades… About spouses that have called us pornographic, immoral, and ungodly.  But, even in these comments, they urged us to continue in our mission. 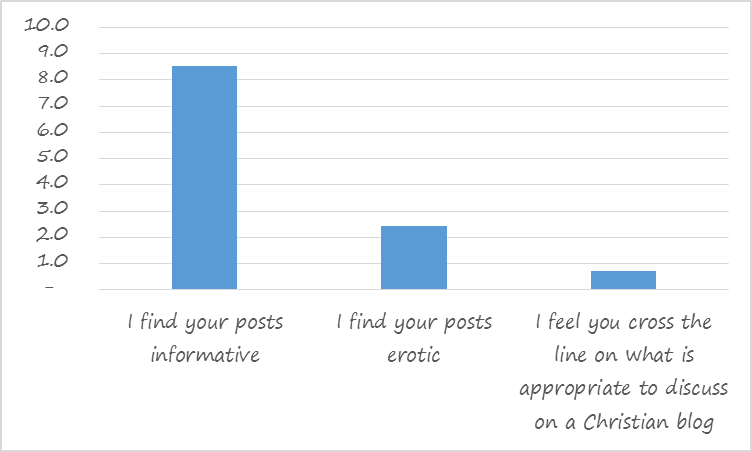 A small group shared some criticism, some was given lovingly and cautious, some were blunt, and some were just rude.  But all were received, believing that if the rebuke was godly, then it was from God.  This is what I heard:

While many love the blog, want to hear more and are never offended, there are a few who do feel uncomfortable at times with the content we write about.  Not because the activities are ungodly or sinful, not because we are too blunt in our use of language, but because we give a glimpse into what our marriage bed is like.  And for some, that feels uncomfortable.  For some it causes a sinful reaction, or at least threatens one, or tempts them.

And as much as I’d like to focus on the encouragement, on the warm words, stories, thanks and blessings, I find my thoughts overtaken by this minority.  What if God is trying to tell me something?  After all, history has proven that, particularly when talking about following God: the masses are not always correct.  In fact, it’s generally a remnant that holds true to God.  That said…I think our readers are already a remnant…

But, I do think we need to be more conscious about how we discuss our marriages.  Not only my wife and I, but also you, our readers.  Because together, we contribute to this body of work.  Sometimes there are comments I feel are crossing the line.  But, its easier to judge other people’s writings.  So, I’m sure that there are a few instances where my own writing might have crossed a line or two as well.

So, I think, for the most part, we will continue, as we have been, but with eyes more open, more aware.  Hopefully, this awareness will help guide our words, to make them more…palatable to a greater audience, without losing any of the informative nature of the blog.

We’re going to continue to write about physiology (since apparently this in high demand), but also theology and psychology.  As much as I can, anyways, being self-taught in all three.  As I constantly feel the need to remind people: I am neither doctor, psychologist, nor pastor.  Do your own research, make your own decisions.  I am not legally qualified to offer prescriptive advice.  Only to ask questions, do analysis and give a perspective.  I counsel you in the same way I would a friend, bother or sister (if they ever asked about sex).  And yes, I know, you all would have liked an “I want more of all three” option, but then everyone would have picked it and I would have learned nothing and it would have been a waste of a question.

We’re also going to keep pushing the envelope on taboo subjects.  Every time I hit “Publish” on an “edgy” post, I worry about who I’m going to offend, but I don’t worry too much, because with each successive post, we get a new influx of people telling us how much it has helped their marriage.  Our various social communities continue to grow, and traffic keeps increasing.

Believe it or not (I have trouble believing it), we’re going to hit 1,000,000 hits within the new 2 weeks if traffic patterns continue.  This is absolutely astounding to me.  Christina hasn’t really accepted it yet, I don’t think.  It’s too surreal.

Oh, and I’m sorry for calling the one side of the spectrum “Tame”…I couldn’t think of another word.  I wasn’t trying to equate it with boring.  Nothing wrong with vanilla/missionary position sex…once in a while.  If you have a better word, let me know.

I’m also working on two or three larger projects, in an attempt to help even more people in the community.

One is a book.  I don’t really have a title yet, and, I’m going to hold off on sharing the specific topic. I hope it will provide a practical action plan for a certain segment of marriages for which the marriage blogging community typically has no answer for, or at least no satisfactory one, because, frankly, I think it’s too large an issue to tackle in a series of blog posts.  But not a week goes by that I don’t hear of a marriage in this situation.  So, I’m going to try to help.

The other two projects…well, you’ll just have to wait a bit.  I might make an announcement for our 1,000,000 hit celebration about one of them.

Lastly, I just want to say thank you.

Thank you for the comments.

Thank you for the emails.

Thank you for the survey participation.

Thank you for re-tweeting our posts, quotes, announcements, surveys, etc.

Thank you for being willing to grow your marriage, so you can model to the rest of the world what Christian marriages should be like.

Thank you for reading and being a part of this ministry.

<
Should my spouse choose my appearance?

3 thoughts on “How we grow as godly writers”