I’m afraid I received this email from our Have A Question page nearly a week ago, so I’m a bit late in answering it.  The questions are: I have 2 questions. The first is, Is it normal or okay to use condoms because neither spouse wants

I’m afraid I received this email from our Have A Question page nearly a week ago, so I’m a bit late in answering it.  The questions are:

I have 2 questions. The first is, Is it normal or okay to use condoms because neither spouse wants to get fixed? My second question is Why don’t men like to get fixed?

Now, this has already been pretty much answered in our Birth Control Options For Christians post, but I thought I’d answer it directly and perhaps add a little more.

Is it okay to use condoms for permanent birth control?

Let’s tackle this one first.  This depends on your own personal theology system.  Most protestant denominations’ doctrine holds that life begins at conception.  In that case, condoms are perfectly acceptable.  In the Catholic system, each sperm is viewed as having the potential for life, and thus (and I hope I’m correct in this) there are a whole slew of sins you can commit merely by depositing your sperm in the wrong place.  The wrong place being anywhere but your wife’s womb.  Someone, please correct me if I’m wrong.

That said, be warned: condoms are not 100% fail safe.  They’re pretty good, but not perfect.  At the end of the day, if you are having sex…you should be prepared for the potential of having a baby, because just about every birth control method fails eventually, especially if you aren’t using it properly.

Condoms have about a 2% failure rate, if they are used perfectly.  However, the way most people use condoms, it has about a 15% failure rate.  Now, the wife has to be fertile at the time that it fails, so that ups your chances quite a bit of not being pregnant (I don’t know how much…stats class was a long time ago), but it’s not perfect.  Just be aware.

Now, mixing condoms with something like charting your cycle (I need to get Christina to post about this) can drop the failure significantly, but it’s still not perfect.

Is it normal to use condoms for permanent birth control?

How do you gauge what’s normal?  Well, I’m going to refer to our Permanent Birth Control survey we did a while back.  We have just under 200 respondents, so not a bad data set.  We didn’t ask about condoms specifically, but we did ask how many people are using permanent birth control measures (like a tubal ligation or vasectomy).  Now, if we only look at those 45 to 60 (I’m trying to weed out those who are still having kids or past menopause), we still have 68 couples represented.  32% of them aren’t using some sort of permanent birth control measure.  Theoretically, they’re not looking to have kids, but still need to be wary of getting pregnant.  I can’t say how many are using condoms, but I’d guess at least a few.

I don’t know if that makes it normal.  But it’s all I have.

Here are the comments from the men who won’t consider or aren’t sure about considering getting a vasectomy (getting fixed) from the same survey:

So, yes, some men are scared.  But it seems a lot of them do it for theological reasons.  Granted, they may be using that to mask their fear.  We’ll never know.

I can answer for myself though.  I am scared.  Here are my reasons:

So, there are my fears.  In addition to that, I honestly don’t know where I stand on the whole theology point.  On the one hand, if God really wanted us to have more kids, surgery isn’t going to stop Him.  On the other hand, I’m not a fan of elective surgery generally.  And this feels elective rather than life threatening.  So, that’s my take.

What would you say to this reader? 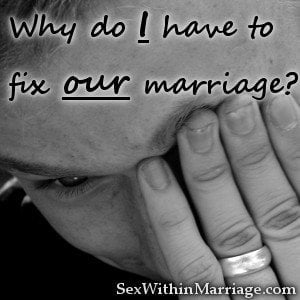 <
Why do I have to fix our marriage?

Should my spouse choose my appearance?
>