The Sex Within Marriage Manifesto

The Sex Within Marriage Manifesto

The topic of sex within marriage within the Christian community is an oddity.  The reactions to bringing up the topic are quite varied:  embarrassment, shame, fear, anger, interest, inquisitiveness, looking for help, looking to share a burden, wanting to know their normal.  Often many of 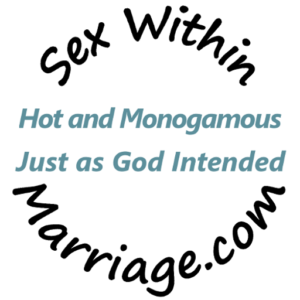 The topic of sex within marriage within the Christian community is an oddity.  The reactions to bringing up the topic are quite varied:  embarrassment, shame, fear, anger, interest, inquisitiveness, looking for help, looking to share a burden, wanting to know their normal.  Often many of these reactions occur in one individual…sometimes in seemly paradoxical juxtapositions.

It is a topic that many want to discuss, but don’t know it until they start to.  When there is a safe environment, there is a point, I find, where people realize they’re not going to die of embarrassment, they’re not going to be ostracized for discussing it, they’re not going to ridiculed or shamed for speaking of sex.  Once they pass that point, they don’t want to stop.  The questions come out in torrents, begging to be heard and answered.  At first, they simply want to know that they’re experiences, desires and drives are normal.  Then they want to know if their struggles are common.  Then they start sharing advice, their own viewpoint on the subject, or they’ll ask for a solution to their problems.  Sometimes these are both the same thing.  A piece of advice becomes a testing ground, to see if others will correct them, to see if they’re approaching sex with the wrong mindset.

But, all of this cannot happen without the first key component: a safe environment.

And so, above all else, I believe that is what I’m trying to create here.  A safe place where people may come, to explore the topic of married sexuality from a Christian perspective.  Because such places are lacking in our Christian communities.  Sex is taboo to discuss in most churches.  It’s a rare elder or pastor who will talk about sex in a frank and open manner.  Our sermons tend to avoid the topic of sexuality, even while the Bible is blatant about it.  Our religion, which should be the most sex-positive in the world, is seen as prudish.  We’re known for reducing sexuality down to a means for procreation, for preaching that sex is a sin, or a necessary evil we must endure.

Some will accept and even preach these explicitly, but when sex is hidden away, when it fails to be discussed, when we shy from the topic, we lend credence to those accusations.  We accept them, implicitly as well.  We make our churches, our homes, our very community hostile to communication about this most serious topic.

In our community, marriages are ravished by by sexlessness, by a lack of intimacy, vulnerability and love.  Beneath the surface, married couples are losing a battle after battle in a war that no one wants to accept is occurring.  They have no supply lines, they have no support troops.  No counsel, no advisers.  Because even acknowledging the war is real is taboo, and so asking for help is a feat too monumental for most to bear.

And so, here, out in the wilderness of the internet, I am trying to build a place, where marriages can come to be fed on this topic.  Where I can share information, share with them my experiences and research.  Not only that, but where they can interact with the information, discuss it, challenge it, debate it.  To give a space where sexuality can be alive, not hidden in the corner, but brought to light were it can flourish in marriages.  This community is meant as a safe haven, an oasis, so that Christians can come to discuss sexuality honestly and openly, without fear of retribution, or censure.  Where we can acknowledge the battles that are happening, ask for aid, and give support.

But, ultimately, I want this to be also a center for spreading this mindset out into the rest of Christianity.  That people take what they’ve learned, not only the information, but the mindset, of being open, of being able to discuss sexuality, and go out into the world and be open there as well.  And when things get tough, when they feel backlash, when they are shut down, it will be a place for them to return, to get strength in safety.  A place to rest, before heading back out into the war that no one else wants to acknowledge.

I cannot find a simple word to encompass all of this.  No simple analogy or metaphor to express my vision for what I’m trying to accomplish.  Perhaps the closest I can get this is:

Sex Within Marriage will be a center for Christians to find healing, rest, camaraderie and training, from which will spread a sex-positive Biblical message to their marriages, and to the rest of the world.

That is my vision for this ministry.  In truth, I believe we, my wife, myself and so many of my readers, are already starting to accomplish it and I hope you will join us and continue to help make it a reality.

<
SWM020: 7 Dirty Fighting Techniques That Should Not Exist In Your Marriage

How can I make him taste better?
>

7 thoughts on “The Sex Within Marriage Manifesto”