Is sexual sin worse than other kinds of sin?

Is sexual sin worse than other kinds of sin?

This post is basically my response to a Twitter conversation, if it can be called that, which occurred yesterday. I saw this tweet: JimEKey: GOD SAYS #sex outside of #marriage is SIN, OF THE WORST KIND, IT IS SIN AGAINST THE BODY, MEANT TO BE THE TEMPLE OF

This post is basically my response to a Twitter conversation, if it can be called that, which occurred yesterday.

JimEKey: GOD SAYS #sex outside of #marriage is SIN, OF THE WORST KIND, IT IS SIN AGAINST THE BODY, MEANT TO BE THE TEMPLE OF HIS HOLY SPIRIT #church 6:18pm, Oct 10 from Web

Now, that phrase “of the worst kind” bothered, me, so I responded:

sexinmarriage: @JimEKey I agree, it’s a sin, but not the worst kind. All sin is equal, and all sin can be forgiven, except blasphemy of the spirit. 9:09am, Oct 12 from HootSuite

Because, well, I felt that what he said was unbiblical.  The problem is, with Twitter, you only have 140 characters, not quite enough to unpack an entire theology.  I was not trying to say all sins have the same impact on yourself and the world, what I was saying is that all sin is equally forgivable and they all have the same impact: distancing yourself from God.  Well, apparently it was taken the wrong way, because I woke up to this:

JimEKey7:49am via Web
@sexinmarriage God says that all sin is NOT equal, and NOT identical, you need to read 1Cor6:18 – Sexual sin is uniquely self-destructive.

JimEKey7:50am via Web
@sexinmarriage Of course, all sin can be forgiven except the sin against the Holy Spirit – which is to reject Jesus Christ.

JimEKey7:51am via Web
@sexinmarriage Sin can be forgiven, if repented of. But it still carries consequences, and sexual sin results in grievous consequences.

JimEKey7:53am via Web
@sexinmarriage Your ungodly attitude makes it sound as if sexual sin is of little concern. Will block you, and may God open your eyes.

Which sort of blew me away, I mean, I didn’t even get a chance to discuss it, just a barrage of statements and then blocking!  Now, I can’t really respond directly, but I still wanted to address this issue, because I’m sure there are others out there who feel the same way.  Also, he said I had an ungodly attitude and quoted scripture.  This is not to be taken lightly.  I believe if someone says I’m not following God or His Word, I should check myself, my beliefs and make sure I am.  So in all humility, I’m going to turn to the Bible and see what it says.  Let’s take a look at the verse(s) he’s using.

What does the Bible say about sexual sin?

Now, obviously, first in the list is the 1 Corinthians 6:18 he referenced.  In fact, let’s go right through to verse 20, because he’s really referencing the entire thing to build this doctrine.

Flee from sexual immorality. All other sins a person commits are outside the body, but whoever sins sexually, sins against their own body. Do you not know that your bodies are temples of the Holy Spirit, who is in you, whom you have received from God? You are not your own; you were bought at a price. Therefore honor God with your bodies.

The problem with using this passage to prove that sexual immorality is the worst sin is this: it doesn’t say that.  I just says there is a difference between sexual immorality and other sins, which is really of little consequence, you could categories a half a dozen sins into their own unique category.  It also says your body is a temple of the Holy Spirit, and that you don’t own it, so treat it appropriately.  It doesn’t say sexual sin is worse, or has a larger impact, or that God places a higher negative value on this sin.

Now, I believe what they have done, and someone correct me if I’m wrong, because I can’t ask @JimEKey myself, was combine this passage with Matthew 12:31:

And so I tell you, every kind of sin and slander can be forgiven, but blasphemy against the Spirit will not be forgiven.
-Matthew 12:31

It can also be found in Luke 12:10 and Mark 3:28-30, basically with the same wording, and are likely recording the same event. The problem is, the verse from 1 Corinthians 6 and these have nothing to do with each other.  They only have a link when you use modern English to define words instead of the Bible.  The dictionary lists the following for the word “blasphemy” as the #1 definition:

Now, if we use this, and count the body as a temple, thus a sacred things, then we could extend this to mean that defiling the body is blasphemous.  But, that is not using the biblical definition of the word, it is how the word is used in our media and common speech.  I believe in letting the Bible interpret itself whenever possible, so we should not be using the dictionary to build our theology, but rather turning to our Bible.

Then the high priest stood up and said to Jesus, “Are you not going to answer? What is this testimony that these men are bringing against you?” But Jesus remained silent. The high priest said to him, “I charge you under oath by the living God: Tell us if you are the Messiah, the Son of God.” “You have said so,” Jesus replied. “But I say to all of you: From now on you will see the Son of Man sitting at the right hand of the Mighty One and coming on the clouds of heaven.” Then the high priest tore his clothes and said, “He has spoken blasphemy! Why do we need any more witnesses? Look, now you have heard the blasphemy. What do you think?”
-Matthew 26:62-66

“Why does this fellow talk like that? He’s blaspheming! Who can forgive sins but God alone?
-Mark 2:7

But Jesus remained silent and gave no answer. Again the high priest asked him, “Are you the Messiah, the Son of the Blessed One?” “I am,” said Jesus. “And you will see the Son of Man sitting at the right hand of the Mighty One and coming on the clouds of heaven.” The high priest tore his clothes. “Why do we need any more witnesses?” he asked. “You have heard the blasphemy. What do you think?”
-Mark 14:61-64

The Pharisees and the teachers of the law began thinking to themselves, “Who is this fellow who speaks blasphemy? Who can forgive sins but God alone?”
-Luke 5:21

So, according to the Bible, blasphemy is claiming to be God when you are not.  Now, the dictionary agrees this is a valid definition, but it’s relegated to definition #4 in my dictionary.  Blasphemy, in the Bible, has nothing to do with not honouring your body, or sexual immorality.  And so, this sin, as all others, is forgivable.

Now, are sins categorized?  Yes, they are categorized in a variety of ways in the Bible.  You can go through Leviticus and find many categories.  I don’t for one instant believe God is in heaven ticking off “oh, that’s a sexual immortality sin, oh, that one’s pride, oh, that one is …” The categories are merely a way for us to more easily understand what kind of things are sinful, they are mean to help, but I think, in cases like this, they hinder when brought up inappropriately.  Do I believe sexual sin is of little concern?  By no means!  I think I’ve discussed this at length in multiple places.  At the end of the day, I believe there really is only one sin: deciding not to follow God’s will, and the only unforgivable sin is going so far in that as to claim to be inspired by God when you know it is not so, or to say “I am God” when you know it is false, which sadly, is the way the bulk of our society is going.

What do you think?  Is sexual sin worse than others?  Is my attitude ungodly?  What does your church teach?  Let me know in the comments section below.  Oh, and if you are a Twitter user, could you send @JimEKey a message letting him know I responded…apparently he’s not taking my calls anymore…something like

<
How do I know my spouse is my soul-mate? 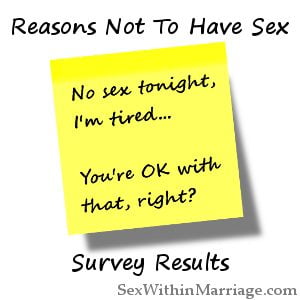 Reasons Not To Have Sex Survey Results
>

51 thoughts on “Is sexual sin worse than other kinds of sin?”