How we kick off our New Year

How we kick off our New Year

I like it when the New Year turns over. I like the idea of a fresh start, having some artificial momentum to springboard from. I like being able to make massive changes all in the name of “New Year’s Resolutions”. So, I thought I’d share 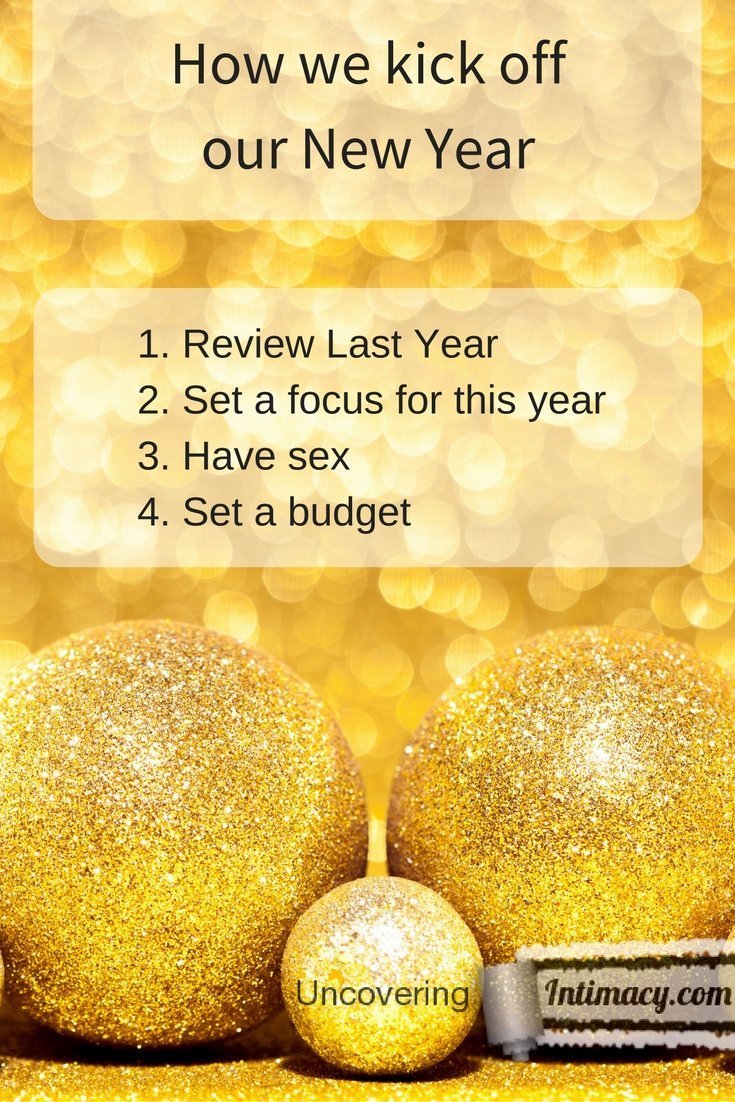 I like it when the New Year turns over. I like the idea of a fresh start, having some artificial momentum to springboard from. I like being able to make massive changes all in the name of “New Year’s Resolutions”. So, I thought I’d share a bit about what we do to kick off the New Year to help make the coming one as productive as we can.

The first thing to do is review what we did last year.  Now, our last year sort of got blown out of the water.  A few months before last New Year’s, I lost a major client along with 95% of my income.  So, we had planned to focus on growing my IT Consulting business.  We also were going to start growing the blog to a ministry that could start to actually support us.  Then in February, I got a job offer from another client that came with a steady income but also a 4 hour per day commute.  That killed focusing on anything except just getting through the workweek.  I spent weekends recovering from the work week.  By the end of the year, I had managed to convince my employers to let me work from home three days a week.  But it took a long while to get there.

So, our goals from last year didn’t work out so well, but there’s a good reason for it.  What I did learn though is that I don’t really like being employed.  This is my first job since I’ve been a teenager.  My entire adult life I’ve been self-employed, and I much prefer that.  Don’t get me wrong, the job is really good, for a job.  I like the work, the people, and everything else (except the 4-hour commute I still have to do twice a week).  It’s just that I like being my own boss.

But, I’m also realizing that I really like being a content creator.  I love writing, I like podcasting (I’m still working on loving that, the editing gets to me).  I’m even enjoying creating graphics and managing all the social media posting and such.  So, the current plan is to become a full-time content creator.  I would love to be able to have this ministry be my full-time job.  But, it’s nowhere close to that yet.  We have a lot of mouths to feed in this household and I’m the sole income provider.

Anyways, that’s what we learned from last year based on our goals.

2. Set a major focus for the next year

As much as I like the momentum from “New Year’s Resolutions”, I also know that they don’t work.  That vast majority of people tend to drop their resolutions in the first three months.  So, instead, we like to pick a major focus for the year.  As I said, last year our intended focus was to grow our own business.  Granted, we dropped it in the first three months too. But that was due to external influences, not because we got lazy.

The way we pick a focus is generally to figure out what is hurting us the most in our lives.  We’ve been doing this type of thing for a few years now.  I honestly don’t remember all of them, but some of them were:

This was the first year we picked a major focus.  We realized that every time we talked, it started a fight.  We were terrible communicators.  It didn’t help that our marriage was sexless at the time.  But that just exasperated the situation, it wasn’t the cause.  So, we took a year and focused on communication.  This was about 9 years ago or so I think.  I remember going to my pastor and asking him for books on communication for married couples. I read a bunch more books on the topic, read blogs, listened to podcasts.  Basically devoured everything I could on the subject.  It took us more than a year to fix our communications issues, and we’re still not perfect.  But, that year gave us a huge jump start.

As I’ve said on the blog many times, the first 7 or so years of our marriage were sexless (10 times a year or less).  After we fixed our communication issues, we could finally talk about it.  We had a lot of difficult discussions that year, and they weren’t all communicated in the best way. But we got through them.  The results of focusing on sex for a year are basically what this blog became.  It made such a huge difference in our marriage that I wanted to help others with their struggles.  At first, I had planned just to share the articles and resources that helped me.  But no one cared.  Then I wrote my own article and suddenly people started reading.  We’re now starting our 6th year of writing content to help with intimacy in marriage.

One year we focused on finances.  We started to budget, something I had been avoiding and dreading for years.  But, when I focus on something, I really focus on it.  So, I made a budget for the year, by week.  I’ve been doing it since.  We’re starting our 7th year of having a weekly budget.  Every Sunday I sit down and run though our income and expenses for the week.  I also track all our assets and liabilities.  Watching every penny come in and out has made a huge difference.  Again, are we perfect now?  No, but at least we know what’s going on.  Budgeting is what has allowed us to exist on a single income with five kids and keep tithing.  Before budgeting, we never managed to find money in our account to tithe.  I also learned all about mutual funds, and RRSPs (the IRA equivalent I think).  I tried trading stocks, futures, forex, CFDs, and silver.  Anything I could get into with a low cost so I could learn more about them.  I didn’t make any money that year in investments, but the education I got was well worth the small sums I lost.  Now I have a small, but growing (13% per year) self-managed investment thanks to that year.

There were others focuses over the years, but those were the ones that made the biggest changes.

This year I’m expecting another big one.  The major focus of this year for us is becoming better stewards of what God has given us.

We’re, admittedly, not very good at taking care of what we have.  One of the biggest issues is that we acquire too much stuff.  This is an across-the-board problem.  From food to clothes, children’s toys, books and tech.  We just have too much stuff.  A lot of it is given to us (clothes and toys in particular), but we end up wasting a lot of money as well.  We have clothes no one has ever worn, food that never gets eaten, there’s not enough room for the kids to actually put their toys away.  Our bookshelves (8 of them or more) are all double-stacked and there are more on the floor.   Plus, I don’t think they could actually get through it all if they tried.

As a result of all this stuff, it’s impossible for us to keep a tidy house.  That causes my wife a lot of stress because she sees it as her job to do so.  As I said, this is an impossible task in the current state of affairs, so it’s not a fair expectation.

As a result, this year, we’re putting a moratorium on buying stuff.  We’re not going to buy anything for the next 365 days, with the following exceptions:

During this year, we also hope to severely declutter and purge so that by the end, we can actually tidy up the house.  That’s our goal for the year.  To not spend a dime on “stuff”, be it clothing, excess food, children’s toys or anything else.

Now, I get, that’s pretty radical, and I don’t expect anyone else to do anything so crazy.  But, we’re a bit of a crazy family, so it works for us. 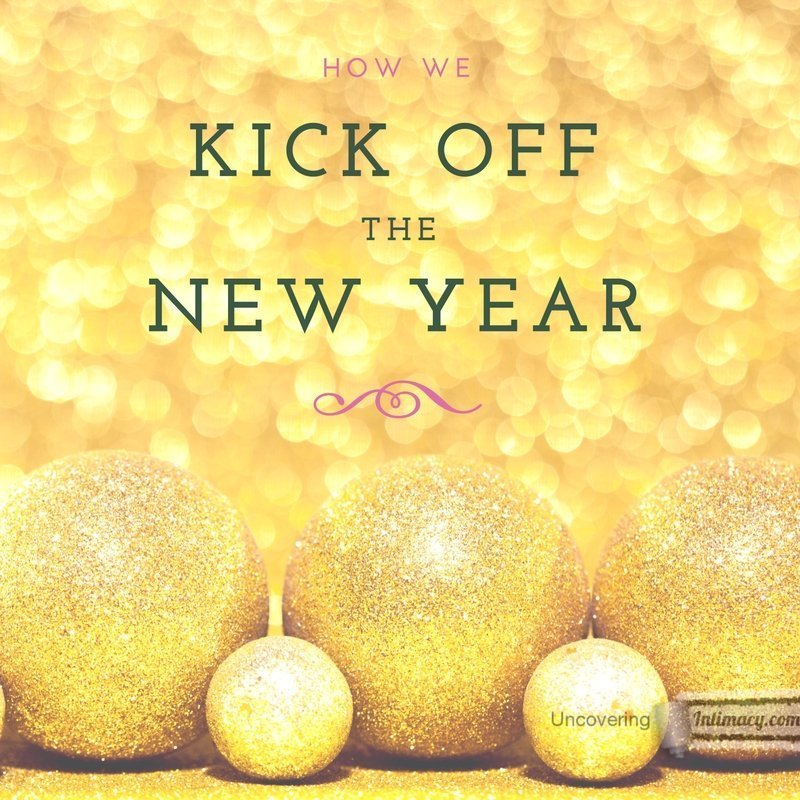 Every New Year’s night after the clocks have rolled over, we still sneak in some sex before we go to sleep.  Even during our sexless years, this was a guaranteed sex night.  Not sure why.  We’ve missed sex on Birthdays, Valentine’s Day, Anniversaries.  We didn’t even have sex on our wedding day, but New Year’s sex seems to be sacrosanct.  “Got to start the year off right” as my wife says.

The habit of budgeting stuck with us, and I love setting the budget for the next year.  It’s a clean slate and you can get out what you hope will happen.  It never does, but I love the exercise of planning what you want to do.  This year was particularly fun as I got to zero out a bunch of categories and dump it all towards giving to the church, debt repayment and investing.  It’s also fun to have conversations with my wife about our finances.  Talking about money always used to kick off a spectacular fight, but these days it doesn’t.  It increases intimacy as we talk about our goals and plans, our hopes, dreams and fears.  It’s awesome.

So, that’s how we kick off our New Year.  How about you?

<
Having kids does not mean a healthy sex life 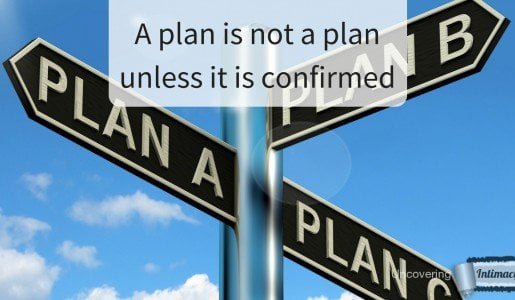 A plan is not a plan unless it is confirmed
>

3 thoughts on “How we kick off our New Year”