How to stop fighting

How to stop fighting

At church today, I was talking to a teen, and during the conversation he asked how often my wife and I fight.  I answered that we don’t fight, and he was floored.  His parents fight constantly.  Then it occurred to me, mine fight fairly regularly

At church today, I was talking to a teen, and during the conversation he asked how often my wife and I fight.  I answered that we don’t fight, and he was floored.  His parents fight constantly.  Then it occurred to me, mine fight fairly regularly too, and most married couples I know do.  So, what happened in my marriage?  Why don’t we fight anymore?  We used to, so how did we stop fighting?

About 7 years or so into our marriage, we seemed to realize at the same time that our current pattern was destructive.  We were never in danger of getting a divorce (neither of us believe divorce is a valid option), but we were in danger of being miserably married to each other for the rest of our lives, a pattern I’ve seen before in my family.  My grandparents hated each other to the day they died.  They had this weird love-hate relationship, by which I mean they loved to hate each other.  They fought constantly, tore each other down, basically did anything to undermine each other.  My parents followed in their suit, but much muted.  I honestly don’t know if my parents like each other.  I know they fight a lot and they constantly take verbal shots at each other.  The entire concept of respect is lacking in either direction I think, and I think we were following their example (again, muted a bit it seems).  I loved and respected my wife, but I had no idea how to show it, and neither did she.  So, we just buckled down and suffered through it.  After all, we were told marriage was work, so we were prepared to put in our work.

My wife’s family came with similar baggage I think, this one sexual in nature.  Her grandmother once asked her “You don’t actually like that [sex] stuff do you?!”  My wife says she has no idea if her parents have a sexual relationship.  But no message is a bad message, and negative attitudes about sex, regardless of how subtle, will come through.

So, when we were married, we had all these issues.  So how do you deal with such baggage?  Well, I’ll tell you how not to deal with it: by not dealing with it!  But that’s what we did, we buried it, buckled down and put our nose to the grind.  The result? Every time we had an opportunity to take a step forward, we held each other back.  We’d make suggestions to our partner with a tone of “why didn’t you think of this?” or if we came up with a solution to a problem, it was frame as “this wouldn’t be a problem if you didn’t mess it up”.  And God forbid we ever make a mistake, it never left, just came around and around like boomerang.

Anyways, by year 7 (or so), we had had enough.  This wasn’t working.  We had kids now.  Something needed to change.  We were not going to pass this attitude of marriage on to them.  So, we sat down, and started talking.

It’s so simple, and so elegant and so important and so influential on every aspect of your marriage.  We evaluated what we fight about the most and decided to work on it.  The biggest arguments we had were about communication.  So, we spent months being very focused on communicating more and better.  We talked more, we asked each others opinions, perspectives, wishes, desires, dreams, hopes, fears, everything!  We asked clarifying questions like “Did you mean [insert what I thought I heard]?”  Just ask questions and be prepared to answer questions in return.  Without malice, without politics, without fear.  Be transparent.  Yeah, it’s risky.  But if you do it together, it’s less risky.  Don’t get me wrong, you’re going to make mistakes and hurt each other.  But it’s worth it in the end if you both stick to it.

Need help with how? Read through the book of Proverbs together.  Do one chapter a day for a month.  It will smack you in the face with how to treat each other with respect to communication.

Then, one day, we noticed we don’t fight about underlying communication issues as much as we fight about money, because our communication had gotten better.  So, we started tackling money.  I made a budget (something my wife had been saying we needed to do for years, but I wouldn’t listen), we talked about it, adjusted, rehashed, discussed more, agreed, and we stuck to it.  We talked about money constantly.  Every day almost.  I learned about stocks, options, silver, gold, mutual funds, the stock markets, everything I could about anything finances related, and I shared the important parts with my wife and we discussed them.  We began to see together how big of a topic this was and how little we knew.  After 2 years, our money issues didn’t go away, but they turned around.

So by this point, we’re not fighting too much anymore. But there was one big topic we still had a lot of anger and resentment around: sex.  So we started talking about sex.  We talked about what was happening, what wasn’t happening, what we like, don’t like.  What sex means to us, how it makes us feel.  Really deep intimate stuff.  My wife shared her perspective of our sex life early in marriage which contributed to our problems.  Things I had no idea she was feeling.  I’m still learning things from that period as we continue to talk.  I finally broke down and confessed my prior porn addiction.  We started to understand what sex meant to each other, and so we started being more aware of how to make sex better for each other, not just the acts, but timing, approach, everything.  And you know what?  We finally did stop fighting about sex, and our sex life improved.  Partly because we were talking about it, partly because we were learning how to see each others perspective, and partly because, I believe if you both communicate, unguarded and with transparency, your marriage will grow.

Edited To Add: I followed up with post with one about how to do Effective Conflict resolution if you are looking for practical steps to help stop the endless cycle of fighting without resolving anything. 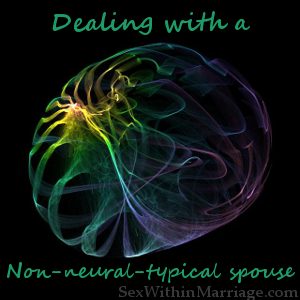 <
Dealing with a non-neural-typical spouse

16 thoughts on “How to stop fighting”