Last week we wrote a post about going to bed naked, how it could improve your frequency of sex.  I’ll be honest, it was a hypothesis.  I had only a data-set of one marriage to go on (my own).  So, I thought I’d add a

Last week we wrote a post about going to bed naked, how it could improve your frequency of sex.  I’ll be honest, it was a hypothesis.  I had only a data-set of one marriage to go on (my own).  So, I thought I’d add a survey to the end of the post to see if my hypothesis was true, or, if it was false, was it true only under certain conditions.  So, here are the results of our “Going to bed naked” survey.  And, since everyone seemed to enjoy her input, my lovely wife will be commenting again where she wishes in purple to give us an additional perspective.

Totaling 216 participants.  This is the first time we broke 200.  Not bad for our little community.

Thanks for participating!! We love digging through the data, well Jay does, I love reading about it after he’s analyzed it.

Do you go to bed naked?

How many times a week do you have sex?

So, this leaves 43% of couples having sex once a week or less. It would be so nice to see this percentage lower.


How are your sex drives matched?

So, just so no one thinks the lower drive spouses are unrepresented.  Granted, the higher drive spouses (relative to their spouse of course) are a much higher percentage of our community, but that’s to be expected, given the subject matter.  Kudos to the lower drive spouses who, I’m guessing, are here to find out how to bless their spouses more in this facet of marriage. I would be one of these people. Thanks for being honest about your drive and I’m sure your spouse really appreciates what you do to help your marriage! I’m a little surprised at the 16% who said they are evenly matched. I wonder if maybe there were a few people that were low drive, but didn’t want to actually admit it? I thought this was a rare occurrence, but that’s like 3 in 20 marriages.  I wish I had asked for age ranges, I would have liked to see how that splits out. That would have been an interesting angle to see.

Now, I have my suspicions (as do many people, husbands and wives, that I’ve talked to), that many in this “egalitarian” section are really wife-led.  We discussed this in a previous survey. Are the men afraid to take the lead? Do you think your wife is scary? I have always wondered why Jay didn’t take more control over our marriage in the early years, I felt I had no choice but to, otherwise it would have been more of a disaster.

So, shall we check out how the genders answered separately?  That’s always interesting.

Do you go to bed naked?

As we’d expect, the incident of wives going to bed naked raises a bit when the women, of this community, are answering the question.  I suspect this has to do with the higher frequency of women being the low-drive spouse, so if they are reading posts on sex and answering surveys on sex, then they are probably making sex a priority in their marriage, thus skewing the general population.  Don’t get me wrong, that’s awesome.  Just something to be aware of when looking at the numbers. I’m really surprised at the 27% that both sleep naked! I didn’t expect that to be that high from the women’s perspective.

How many times a week do you have sex?

So, more than half (55%) of the men are having sex once a week or less.  I feel for you guys, and I’m doing my best to find ways to help.  Hang in there. I’m so sorry that you guys aren’t getting the attention you deserve from your wife. Patience, and prayer, and hopefully you will see an improvement.

Looks like the women are generally fairing better than the men in this community.  Again, as stated above, this is expected.  But, I know there are some wives who are being refused by their husbands as well which make up some of those low numbers.  I’m working to try and find ways to help you to. For the others: way to go on blessing your marriages ladies! Keep it up!

How are your sex drives matched?

Hats off to the guys who admit their wives have a higher drive than them.  That takes some courage.  I’d imagine that number is deflated due to the stigma attached to admitting it. Perhaps some of the men that said they were the same should have considered that perhaps their wife actually has the higher drive.

Again, I don’t believe this is indicative of the general population, but I do think the stereotype that men always have the higher drive is severely flawed.  I haven’t figured out how to get an objective, representative ratio yet. I think it’s really interesting, even considering the fact that the women that read these types of blogs generally have higher drives, it was still split evenly as to who has the higher drive. Not really sure what it means except that women here have higher drives generally.

As I’ve said before, I think that egalitarian is high and the “wife leads” is low, but we’ll accept it as is for the purpose of the survey.

Now, I’m surprised, usually the wives who lead the marriage won’t admit to it.  We have a few here that do it seems.  I applaud your admitting to reality.  I am curious what your thoughts on that reality are (whether you enjoy it or not), as many women I’ve talked to who run households wish nothing more than for their husbands to step up and lead. I’m really curious too!!

So, here’s the question everyone’s been waiting to have answered:

Does going to bed naked increase the sexual frequency in a marriage?

Across the board: Yes.  Going to bed naked increases the frequency of sex in a marriage. (Tweet This)

BUT, you both have to go to bed naked.  According to our results, one spouse going to bed naked has a negligible effect on frequency (3% gain), but both going to bed naked increases the frequency by 92%!  That’s nearly double!  Oddly enough, if both spouses sleep naked, it’s only a 49% increase…which is nothing to laugh at, but it is a bit confusing.  I mean, their naked for longer, that should mean more sex, right? That’s what I would have thought.

Here’s my hypothesis:  Some spouses that both sleep naked may be going to bed naked just because they are comfortable sleeping that way.  Whereas the couples who are going to bed naked, but sleep clothed, I think, are getting naked for the expressed reason to have some naked cuddle time, which focuses on sexual intimacy (if not resulting in sex that night), and focusing on sexual intimacy is a good way to increase sexual frequency in a marriage. I wonder though, do the couples that just sleep naked not enjoy their spouse’s  nakedness? I couldn’t imagine that if we actually both slept naked that our sex life would decrease like these stats suggest.

So, for those who want the actual frequencies:

However, these numbers (particularly about sleeping naked) are being thrown off by another factor: marriage dynamic.

On average, our respondents are having sex 2.2 times per week.  What’s interesting is how it’s split up by marriage dynamic:

The husband-led marriages have sex 123% more than wife-led marriages and 70% more than egalitarian marriages.  I can attest to this, because we basically went through wife-led to egalitarian to husband-led in our marriage while noticing an increase of frequency along the way.  I’ve talked to quite a few couples who saw the same increase in their marriage as the husband stepped up to lead.  I know this isn’t going to a popular assessment to the 45% of my readers who are egalitarian, but it’s what I see, both from anecdotal evidence, and in the data.  So the husbands out there that want more sex, I’m sure there are quiet a few of you…do you see what you have to do? It is amazing to me the difference a marriage feels with Jay being the leader. It is so freeing!

We see the same sort of progression in terms of people going to bed naked.  Wife-led marriages are the most clothed at bed (38% have one spouse naked), egalitarian are next (44%) and husband-led marriages apparently the most clothing optional (60%), while oddly enough, the egalitarian marriages tend to sleep naked the most out of the three groups.  But again, I suspect that this is often due to comfort level at sleeping rather than sexual intimacy in many cases, as it doesn’t seem to be leading to more sex.  The data supports this.  In egalitarian marriages, if both spouses come to bed naked, the frequency of sex drops down to 1.3 times per week (from the 1.7 average).  In fact, in egalitarian marriages, unless both spouses come to bed naked (and not because they sleep naked), the frequency is at 1.3 across the board.  If they do, it rises to 3.0 times per week, which is still behind the 4.0 times per week the husband-led marriages see in the same circumstances. Egalitarian marriages are confusing! Perhaps since they are both leading, they don’t really know who is taking the lead when they both go to bed naked, so they just go to sleep while waiting for the other one to initiate?

I know, it’s a lot of numbers.  Basically the gist of it is this.  In terms of sexual frequency, the best situation to be in is a husband-led marriage where both spouses are going to bed naked, and not just because they sleep better without clothes on.  These marriages, on average, have sex four times per week.  The worst place to be is in a wife-led marriage where only one spouse comes to bed naked.  These marriages have values so low that it’s not really represented well in the data (0.7 times per week or less).  Also, we saw no wife-led marriages were both spouses were going to bed naked, and only two where they both slept naked, so the data there is not from a very deep data set.  I suspect that 3.0 is not representative of the common population in these types of marriages.

So, what does this mean for you?  If sexual frequency is an issue in your marriage, could you make a change to go to bed naked together? How can we encourage you to try and go to bed naked?  Also, wives, do you want to be in control? How can we help you help your husband be the leader God designed him to be?

And if there are any other questions you have that weren’t answered, please let us know and we can run another survey, or, if we have the data, do the analysis to answer your question.  You can email us, post a comment below, or submit a request on the anonymous Have A Question? page. 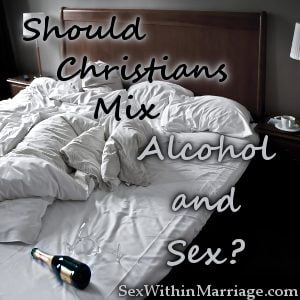 <
Should Christians Mix Alcohol and Sex? 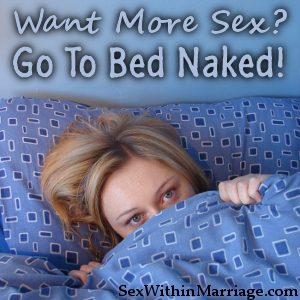