Can’t keep his penis in while trying other positions

Can’t keep his penis in while trying other positions

I received this question yesterday from our anonymous Have A Question page I really don’t think you have tacked this before as I have looked, but my question is about different sex positions. My husband and I have been married for 10 years and the

I really don’t think you have tacked this before as I have looked, but my question is about different sex positions. My husband and I have been married for 10 years and the only position that seems to work is with him on top. We just tried the rear-entry and we have tried with me on top and we can’t seem to keep his penis in. Is there any help?

I had some other questions in the queue, but this one was completely new, as the reader suspected.  So, I couldn’t pass up the chance to answer a new question.  Plus, I don’t think I’ve ever seen any blog post or podcast episode anywhere on “staying in”.

Now, the ability to stay inserted relies on three things that I can think of:

If the husband has a longer penis, it’s easier to keep it inserted because, well, more of it can stay inside while thrusting.  If he has a shorter penis, then you either have to find a position that manages to get you closer, or you have to make shorter thrusts.  I’ll talk about those positions in a bit.

Body shape plays a role that I don’t think a lot of people like to think about.  Let’s start with the husband.  If the husband is carrying extra weight, this affects things in a couple of ways.  Firstly, a layer of fat over the pubic bone can actually hide some of your penile length.  I’ve heard that for every 30 lbs you are overweight, you lose one inch of length.  Think about that.  As well, if you have a bit of a stomach, then that’s going to likely get in the way as well during some positions.

Women, on the other hand, have a tendency to carry excess weight in their thighs and in their butt.  Sorry, but it’s true. Not every woman, but a lot.  In missionary position, this wouldn’t matter too much, so long as you’re still fairly flexible, but in other positions, like rear-entry, this adds another layer that separates you.  But, if you are also carrying some weight below the waist in the front, then that can increase the distance needed to cover to stay insert as well.

I know it’s not polite to talk about weight, but the fact is, for a lot of people, their weight is negatively impacting their sexual experience in a serious way.  I’m not talking about how you look, because most men find their wife attractive regardless, but rather about how good it feels for you.

Some positions make it easier to stay in

Of course, missionary positions is the easiest for staying inserted, because you can pretty much get your pubic bones against each other without a lot of extra padding getting in the way.  But there are ways you can tweak other positions to get deeper.

In rear entry, you basically need to adjust the angle.  The typical rear-entry position is “doggy style”.  That is, the wife is on her hands and knees and the husband is directly behind her.  In this position, there’s a lot of extra padding potentially in the way.  Even if you aren’t overweight, butts have fat.  They’re supposed to.  And that butt is right in between the two of you.

But, you can mitigate some of that extra layer simply by having the wife put her chest and head on the bed.  This changes the angle somewhat.   Then have the husband get a little closer, and thrust “upward” as well as just horizontally.  I’m not exactly sure of the angle, but something like 45 degrees.  It’s a lot harder to do, you’re muscles are going to burn after a short time, but you may find that it helps a lot.

Woman on top has some of the same barriers, but in this case it’s usually thighs getting in the way.  Plus, a lot of women like to be down closer to their husband while they’re on top.  But, this angle the entrance to the vagina away and makes it difficult to stay inside for some.  Instead, sit upright, back straight.  Stick out those breasts your husband probably loves to see.  It takes a bit more courage, but you’ll find that he should be able to get a bit deeper, which will make it easier to stay in.

Another position you might want to try is this:

Have the wife lie on her side.  The leg closest to the bed should be straight, the other up (bent at the knee is fine).  Then husband basically straddles the leg that’s straight and enters his wife.  With a bit of pelvis adjustments for the wife, you should be able to find a position that gets him pretty deep.

So, there are a few ideas.  Some take a bit longer to work on (like weight), others you can try tonight (like the position changes).  Anyone have any other suggestions?

<
Curious about being with someone else 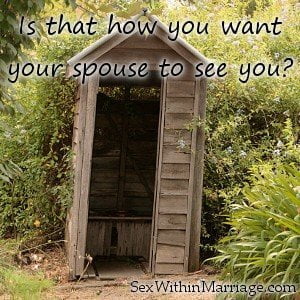 Is that how you want your spouse to see you?
>