Last week, WordPress sent me my annual “year in review” email.  The results are here if you care to see them.  It’s funny, last year I had planned to post every Wednesday, and that shows…for 4 months.  Then it sort of fell apart and I 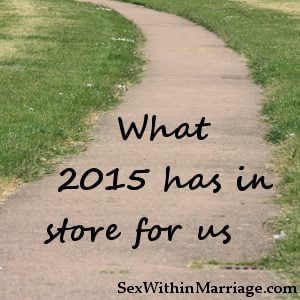 Last week, WordPress sent me my annual “year in review” email.  The results are here if you care to see them.  It’s funny, last year I had planned to post every Wednesday, and that shows…for 4 months.  Then it sort of fell apart and I went back to sporadic writing.  Anyways, I thought it might be helpful for me to sit down and think about what I want to do with the blog this year.  How am I going to try and grow this ministry, to help more people, and be more effective.

Recently, I announced Anonymous Marriage Coaching for those couples who are struggling to progress to the next level in their marriage, who are stuck in a rut and just need some help to get moving, or who want grow and aren’t sure in what direction, or know where, but lack the skills the push through the plateau they are on.  If you’re curious about it, check out the page, or send me an email and ask some questions.  I’m always willing to talk.

I also announced that I’m writing a book, not just on sex, but on marriage in general.  I’m hoping to finish it this year and have it available before my next “year in review” post, but we’ll see.  I’ve never written a book before, so I’m not sure how to gauge these things.

I’ve been considering doing my posts in an audio format as well, for those that commute, or are vision impaired, or just don’t like to read.  Basically just me reading the posts (and Christina if I can convince her).  A phone call, yesterday, with a reader, brought this to the forefront of my mind again, so I spent a bit of time yesterday researching podcasting and looking at microphones.  I think I’m willing to give this a shot, but I’d love to know if that is something of interested to you, or your spouse (who perhaps doesn’t read, for the various reasons listed).  The struggle will be to make it sound interesting…and not just me reading a wall of text.  I’m hoping it will be good practice for me for possible future speaking engagements.  After all, who knows that lies in the future of this blog.

I’ve also been kicking around the idea of doing some online workshops over Google Hangouts (just audio), or something similar.  Probably the first would be focused on communication.  If this sounds interesting to you, shoot me an email, and I’ll put you on a list for a trial run.

Changes on the Blog

Well, some of you have noticed that I added a button for Anonymous Marriage Coaching, as I said above.

Also, I lost one of my favorite plugins: nRelate.  It’s the plugin that showed other posts you might be interested in at the bottom of each post.  nRelate closed down as of December 31st, so I’ve been scrambling to fine a replacement.  Honestly, I had given up, when I got an email from Limk.  Basically, they do the same thing.  We’re having issues getting the pictures back, but I spend a long time with Oguz, the owner of Limk, getting it to work on our blog.  I think I gained a reader at the same time.  Anyways, after many struggles, we have related content back, and that’s awesome.  Thanks Oguz!

I think I’m also going to spend some time rewriting some old posts.  I’m continuously getting little promptings telling me that one day, I might go public with this.  As it stands, there needs to be a few … tweaks to a great many posts.  I need to separate a little bit from some of our personal experiences, and third party a few things, because, while we are by no means ashamed of what goes on in our bedroom…there are those in my personal circles who could not handle knowing.  I’m afraid I know some “sex should be done at night, in the dark, in a bed, under the covers, missionary position only, no extra activities, silent as ninja’s” Christians who are very good friends of mine.  My blog will be enough of a slap in the face to them without them knowing exactly which activities we personally participate in.  So, I’m going to see if I can find a way to still hold to my mandate of communicating that sex is good to communicate about…while holding back enough to make it publicly acceptable.  A difficult line to walk, but we’ll try.

I’ve been forced to change my policy on comments.  When I started, my standing policy was to approve every comment that wasn’t spam.  In the last couples of months, that outlook has been severely challenged.  I’ve had comments that had no valuable content, only a very angry, vulgar response.  I deleted it.  They left no email, so I couldn’t tell them why.  Sometimes we get comments from readers who have a colored past, and they share some of it, in the hopes it will help someone else deal with there’s.  When there is no glorification of this past, I let them through, because I think they have value.  But, I’ve recently got a couple comments that sounded more like they were bragging about their sexual history with multiple partners, and I just couldn’t allow that content.  I felt it went against our mandate of promoting healthy sexuality within marriage.  I don’t have a concise, written policy on comments, but in general: if I believe it will help someone, I let it go.  If I think it’s detrimental, I’ll stop it, and send an email to the writer, if I can, explaining why.  Far more often, I tend to allow the comment, and debate it, in public, on the blog, because I think that discussion, even debate, is healthy.  So, please, don’t let this stop you from commenting.  I just felt I needed to be transparent and let you know about this change in my personal approval of comments process, because I’ve clearly stated in the past that I don’t delete comments, and that, unfortunately, is no longer true.

I’ve been considering adding a donation button.  I’ll be honest, I hate asking for money.  I’m not asking for money.  But, there have been a couple readers who have asked how to send money, or a gift.  I truly appreciate your generosity.  I talked to some people I trust, and they basically told me I was an idiot for not having a donation button up.  So, I guess I’ll start looking for the best way to do that.  If you’ve been looking for a way to send something, keep an eye out, I probably won’t advertise it’s existence.  If you never had that thought, ignore the button if you see it.  I intend for this blog to always be free, with no pressure to contribute financially.  But for those who do wish to show their support in some way, I’ll find a way to help you do that, and I appreciate your  generosity.

I also hope to do some more book reviews, there’s a lot of good books coming out in the Christian sphere, and while I read a lot of them, I’m not always so good about reviewing them.  So, I’m going to try to do more of that.  As well, I think I want to write a couple adult toy reviews.  There have been quite a few readers who, in the surveys comments, have expressed that they don’t know where to start, or what to buy.  So, I think I’ll write a couple about the toys I personally know are of high quality, and are available over at MarriedDance.com, so you can shop without worrying about what you’ll see.  Also I get a nice commission for anything you buy there when you visit from this site, so it helps us out with hosting fees and such.

Changes in our lives

This year is going to represent some major changes in our lives as well. We have a new baby boy arriving in February!  That’s always exciting and awesome, but with a baby comes recovery time, so I’ll probably have a post about how to deal with a sexual hiatus.

My work has already been severely cut back, and so I’m trying to decide what to do: go find a job, find some new clients, or pour myself full time into marriage ministry.  Each of these has their struggles, downsides, upsides and all that.  Getting a “real job” would mean my time for ministry would be largely diminished, but it’s guaranteed income.  Finding clients involves a lot of hard work and rejection and may not bear much fruit, but if it does, then my life wouldn’t change much.  Marriage ministry takes a long time to turn into something that can support a family of 7, but if it did, I’d have my dream job.  So, that is the difficult decision I am faced with.

These are the thoughts in our head as 2015 starts up.  What improvements would you like to see on the blog in the coming year?  Let us know in the comments below, or send us an email.