Your relationship has to be based on more than just sex

Your relationship has to be based on more than just sex

I was talking with Keelie from LoveHopeAdventure.com today and we got into a conversation about intimacy.  In particular, about intimacy while dating.  It ended up being a good discussion, and so I thought I’d share what I shared with her because this affects not only couples

I was talking with Keelie from LoveHopeAdventure.com today and we got into a conversation about intimacy.  In particular, about intimacy while dating.  It ended up being a good discussion, and so I thought I’d share what I shared with her because this affects not only couples who are dating or singles who are looking to date, but also people who are now married but might have started their marriage off on the wrong foot.

During our conversation, I made the comment that I think perhaps there is wisdom in couples not kissing when they are dating.  It’s not a new idea.  There are plenty of people out there who think you shouldn’t kiss until you’re married.  I’m not sold on that one.  Truth be told, in the past, I thought it was a bit ridiculous to say couples who are dating shouldn’t kiss either.  I mean, my wife and I kissed when we were dating.  A lot.  But that doesn’t mean we should have.  We did a lot of things we definitely shouldn’t have done and I wish I could go back and change.  In fact, it’s one of my greatest regrets in life.

The problem is that while we’re taught not to go too far, we often aren’t taught why.  Just “don’t”.

In romantic relationships, we deal with a lot of neurotransmitters that can really mess with how we think.  One of the big ones is dopamine.

Dopamine is often known as the reward chemical of the brain.  We really like dopamine.  In fact, it’s what drives a lot of our behaviour.  We get dopamine when we do something new and exciting.  We get it when we “win”, even if that “win” is simply surviving or not having something bad happen.

It’s one of the reasons why sex is so good.  Because we get this huge dose of dopamine for doing something exciting and having an orgasm from it.

So, what does this have to do with dating?  Well, when we start dating, it’s new and exciting.  We get a big chemical high from this which results in infatuation.  Your brain is literally on drugs. Natural drugs, but it has a similar result.  Our thinking is impaired, especially judgement regarding the object of our affection.

We think about them all the time, and say things like “I’d die without them”.

Now, these neurotransmitters have a purpose.  They help us bind quickly to a potential mate.  The real problem occurs when we add physical intimacy into the mix.  Because now the dopamine boost is even greater and our judgement becomes even more impaired.

While dating should be a time of weeding our bad potential mates, when a physical relationship is added, it becomes a time when physical intimacy is growing at a rapid pace, far faster than other areas of intimacy.  These chemicals that result in infatuation can last months.   The issue is that during those months, you feel like you are getting closer together, that you are growing in intimacy, but the truth is that the relationship is being held up largely by a single force: that of sexual attraction and gratification.  Even if you aren’t having sex, that physical intimacy releases the same chemicals and has the same effect.

A relationship based on sexual attraction and gratification

And so, you end up with a couple that feels bonded together thanks to being “drunk” on these infatuation chemicals and they appear to be the perfect couple.  They don’t fight, because conflicts aren’t really being addressed, just skipped over.  They have no worries because their risk assessment is impaired, especially if they’re under 25 because that part of the brain isn’t fully developed.  They’re ready to take on the world with the mantra “all we need is love”.

And while it’s true that love conquers all, what this couple is experiencing is not really love.  What they’re feeling is infatuation, which is really self-gratification.  They want to continue to be around their partner because these chemicals that they are constantly being dosed with are supplying an addictive supply of good feelings.  While they believe they’d do anything for the other, the truth is, they’ll often do anything to continue to feel the way that they are.

These couples date, get engaged and then married, often without ever building a real relationship.  One built on trust and real love and devotion to each other.  One built on multiple types of intimacy that including real vulnerability.  And throughout the stages of the relationship, they are bouyed by cultural celebrations: going steady, engagement and marriage all come with large doses of dopamine, because you are “winning”.  This is what life is supposed to look like.  You are on the right path.

When the chemicals wear off

But, eventually, as with all addictive substances, you need more and more to get the same high.  You either need a bigger rush, or you need it more often.  At the same time, real life is setting in.  Careers, bills, a house to keep and now that you’re living together you can’t avoid conflict.  Conflict itself isn’t bad, but if you’ve never learned how to deal with conflict, then the response to conflict can be devastating.

All these things together tend to decrease interest in sex for at least one spouse and suddenly the thing that was holding up the marriage is no longer as strong as it was.

Often then couples start making bad decisions.  They have children to fill a hole in their life.  They expand their sexual activities dangerously looking for a new high that will make them feel in love again.  And the truth is, these things can work … for a short time.  It’s a temporary fix of their favourite drug.  But, it’s temporary and eventually, the same issue falls into place.

And this is where the “seven-year itch” comes into play, though it doesn’t have to be at the seven-year mark.  At some point, one or both spouses no longer feel loved, because they aren’t getting what they want out the marriage.  The relationship is all about them, and if they aren’t getting what they want, then it’s a huge problem.  Some turn to porn, some become workaholics, some have affairs and some just give up.  Others get divorced, and often in their final blow to their spouse say “I never loved you”, which is sadly true.  They didn’t.  They loved themselves because they never took the time to build a real relationship.

The reality of most marriages

The truth is, most marriages start off this way.  We don’t get married so we can serve our spouse for the rest of our life.  We get married so that they can make us feel good for the rest of our lives.  I know mine did.  I think it took us probably the first decade to adopt that first mindset.  I wish that had been taught to us earlier.  I hope I can somehow find a way to teach my children that before they get married.  When I do, I’ll make sure to make it available as a resource.

If you’re reading this post and you’re not yet married – If you’re having sex, stop.  Find out how to love sacrificially without the reward of dopamine.  That includes hand jobs, oral sex, heavy petting, dry humping, sexting, Skype sex, Snapchat sex, and whatever else people are doing.  Really want to test it?  Stop kissing and see if you can survive as a couple.  In the mean time, learn to deal with real conflicts now.  Learn to communicate, to share yourself, not only logistics and fluff but deep hopes, dreams and fears too.  Also your faults and challenges.  Let them know what they’re getting into, because it’s going to come out eventually and it’s better to deal with it now than after they find out you’ve been hiding it from them for years.  Trust me, I get a lot of emails from spouses who find out the hard way.

If you’re already married – Start focusing on other areas of intimacy.  Start praying together.  Find a book you both can read and discuss.  Spend time, alone, talking, without cells phones and other distractions.  Discuss things that don’t involve work, kids, or logistics.  Don’t know what’s left?  Check out Keelie and Austin’s book of conversation starters.  You don’t have to stop having sex, in fact, I don’t recommend that at all in most cases.  Because while sex cannot be the basis for an intimate relationship, it can strengthen one.  Instead, work to extend your intimacy into other areas so that sex isn’t the only thing holding it up.  If you have kids, teach them this when they get old enough to start dating.

Anyways, that was our conversation.  Keelie is going to write a post of her own soon, so check out LoveHopeAdventure.com for that. 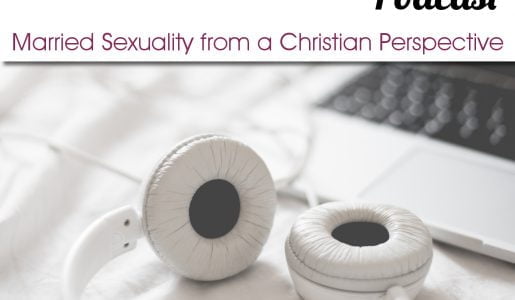 Why lower-drive spouses should initiate sex
>