Paul over at The Generous Husband recently wrote a post entitled Defining Sex and it got me thinking.  Now, he was looking for a straight, all purpose definition of sex.  But, I don’t think we can use that.  Actually, I wish he had separate works to define

Paul over at The Generous Husband recently wrote a post entitled Defining Sex and it got me thinking.  Now, he was looking for a straight, all purpose definition of sex.  But, I don’t think we can use that.  Actually, I wish he had separate works to define sex.

This is one of the examples Paul brought forward.  He had mentioned that he had experience with men who had done “sexual” things with women other than their wives, but since they didn’t have “sex”, they didn’t consider it adultery.

But, as I wrote yesterday, the relationship is more important than the rules.  When discussing adultery, I think we have to bear in mind Jesus’ words on the topic:

But I tell you that anyone who looks at a woman lustfully has already committed adultery with her in his heart. – Matthew 5:28

I think Jesus was pointing to a deeper truth: that adultery is less about the behaviours engaged in, and more about the mindset.  If you are having a relationship with anyone that mimics the one you should have with your spouse…then you’re committing adultery.

In the case of emotional adultery (emotional affairs), this can include how you communicate.  If you are texting someone intimate (which may or many not include sex talk), if you are thinking more about this individual than your spouse, if you are sharing more deeply of your self with them than your husband or wife, then I’d consider this a form of adultery.

When you are a couple, but not yet married, or perhaps engaged.  What is sex?  In these cases, I think the definition switches a bit.  You start taking steps towards being a married couple (if you are engaged at least).  Some of the boundaries blur a bit.  Especially in the mind.  You can’t stop thinking about them, focusing on them, being attentive, and these are good things, I think.  They should be allowed to happen.

Being engaged, many find themselves thinking about what sex will be like (especially if they are virgins), and I think that’s perfectly normal and acceptable, so long as it doesn’t consume them.  If you are starting to make mental porn…that’s probably going too far.

Dealing with sex and marriage

But, still, it’s deeper than that.  It includes an emotional intimacy as well.  After all, a husband or wife can acquiesce to sex multiple times a day, but if there is no shared connection, if it’s just a physical act…then I think they’re missing the boat on sex.  Arguably, I’d say they’re not having it. Not in a “sex within marriage” sort of way.  What they’re having is penetration and orgasm(s)…not sex.

Because, ultimately, what spouses want is more than just intercourse…they want an intimate, mutually generous, mutually beneficial, mutually … awesome relationship, and that includes a healthy sex life, even if it doesn’t include “intercourse” specifically.

So, defining sex is very difficult in these different situations.  We get too hung up on the definitions, we focus too much on the rules, and not enough on the impact it’s having on our relationship.  I think that’s where we should focus.  So, I guess this post is really just a “part 2” of yesterday’s post.

The problem is that it takes a lot more communication, and often embarrassing conversations, to teach them what “have good relationships” means.  Rules are easier…they’re a convenient way to shirk on our duties as parents, as teachers, as pastors, elders, and generally fellow Christians.  Don’t do a half-baked job.  Tell people what “having a good relationship” means, instead of focusing on the “do’s” and “don’ts”.  Because sex, ultimately, is not what happens in a bed…it’s what happens in your head.

<
How do I get my wife to be more sexually active? 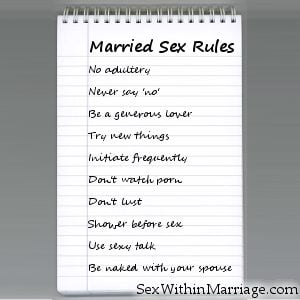 The relationship is more important than the "rules"
>