When Is The Best Time To Talk About Sex With Your Spouse?

When Is The Best Time To Talk About Sex With Your Spouse?

The best time to talk about sex with your spouse is right after sex, in the dark, lying on your back, facing the ceiling.

Why do I think this?  There are a few reasons.

There are many marriages where sex is happening and no one ever talks about it, even to each other.  It’s just that thing they do behind closed doors that no one needs to discuss…ever…even behind closed doors.  And in some ways it’s sort of ridiculous that you can have sex, literally exchanging bodily fluids, we see each other at our weirdest, at all angles, and yet the exchange of ideas and feelings…that’s just too much.  But in other ways, it makes sense, feelings are far more intimate than our physical actions.  While everyone sees our bodies every day (covered generally), our minds are, for the most part, closed but to a select few, if any.  Many of us feel that if our real thoughts and feelings were known, we would be rejected, and being rejected based on your body is one thing, but rejection of the mind, of who I am, that’s devastating.

So, here are a few tricks to help get over this first hurtle if you are unaccustomed to talking about sex, or really any intimate subject (like feelings, or spirituality).

Turn the lights off

Many couples keep the lights off during sex anyways (which is a whole other topic), but I think it’s for much the same reason.  Darkness allows us to hide.  It’s very exposing to be transparent about your feelings and thoughts on a topic like sex, and having light in the room often is just too much illumination, if you know what I mean.  The darkness allows us to retain this sense that we are still safe, they can’t really see us, we’re not completely naked and exposed, body and mind to our partner (even though we are).

Lie side by side looking at the ceiling

This really does the same thing as turning the lights off, but is another way to sort of reduce the perceived vulnerability.  We often grow up with the feeling that sex is a taboo topic, that we should be embarrassed or ashamed to talk about it, and it’s really hard to look someone in the face when you are ashamed or embarrassed.  So, don’t.  Baby steps.  Look at the ceiling, it’s safe.  There are no deep eyes searching yours, no facial expression to watch for, no body language to be wary of.  You can ignore a lot of that non-verbal communication that is going to be severely muddled anyways because of the topic of discussion.  Actually, this tip can implemented in a variety of ways: walking side by side or sitting together alone in a vehicle.  These situations make it easier to open up and share for those couples who are uncomfortable talking about certain topics.

This actually include two effects.  One of the effects of sex is a fairly massive release of oxytocin.  Oxytocin is called the “love hormone” or sometimes the “bonding hormone” or the “trust hormone”.  It’s what makes us feel safe, wanted, trusting, bonded to our spouse after sex.  Ever notice, for those that don’t fall asleep right after sex, that your best conversations come after a really good sex session?  Well, use this effect to your advantage.   This dose of oxytocin has a tendency to lower inhibitions due to the heightened feeling of trust towards your spouse  during this time.  So, it might be an ideal time to bring up something that requires a lot of trust to talk about, like sex.

Another benefit to this time is that you don’t have to worry about the discussion ruining your chance of sex that night, because you just had it.  So that takes some pressure off.  You can speak your mind a little more opening when it’s not such a high-stakes conversation.  Also, there isn’t the pressure to instantly act on the discussion, it can wait until the next time you are intimate, giving you time to gear up for it if need be.

So, that’s my tip: After sex, in the dark, starting at the ceiling.  Let me know what you think the best time to talk about sex is in the comments below. 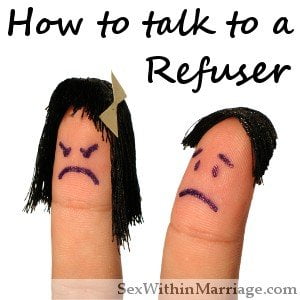 <
How to talk to a refuser 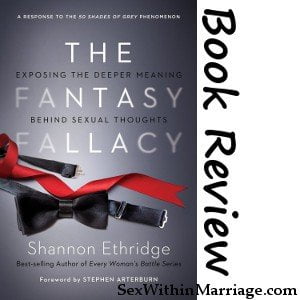 16 thoughts on “When Is The Best Time To Talk About Sex With Your Spouse?”